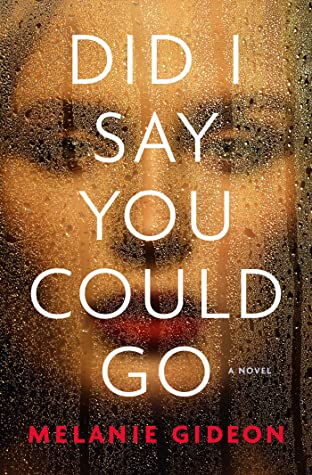 And then there are times when I just want the drama. Bring on the scheming, the backbiting, and all the pointed little barbs beneath the bright smiles of frenemy-ship! Did I Say You Could Go brings all of that and more, with a pair of mother-daughter duos who become BFFs mostly just because the girls go to school together.

The dynamics of the mothers’ friendship is set up early on: Ruth is a wealthy divorcee who latches on to Gemma for friendship; Gemma is a widow / financially struggling single mom, who can’t resist the lure of Ruth’s generosity with her wealth. While they were estranged for some time, a scandal at Gemma’s tutoring company provides Ruth the opportunity to burrow her way back into Gemma’s friendship, and while Gemma has misgivings, she also can’t afford to turn down Ruth’s help.

I love how the author sets up both women as being kinda shady when it comes to their friendship. From the start, it was easy to typecast Ruth as the creepy, too-intense one, so learning that Gemma is also using Ruth for her money added a nice layer of complexity to their relationship.

The story does take a bit of a sadder, more troubling, turn than I anticipated, primarily when it came to the daughters. We learn that Ruth’s neediness for Gemma’s friendship translates to cruelty and abuse when it comes to her own daughter Marley, whose shyness and awkwardness are nowhere near the kind of daughter Ruth wishes she had. The question in the title turns out to be endemic to Ruth’s relationship with Marley, and I found the scene where it was asked to be especially heartbreaking.

In contrast to Marley, Gemma’s daughter Bee is one of the coolest, most popular girls in her class. But we later learn that she has some mental health struggles of her own, and a bad choice in love leads to a downward spiral that’s also heartbreaking to see. As a reader, I wanted so badly to reach out and intervene on both Marley and Bee’s behalf, and help them out before their respective situations turn totally hopeless. Those parts of the book were more emotional than I expected, and kudos to the author for getting us so invested in her characters.

Overall, Did I Say You Could Go is both a taut and fascinating page-turner about a rather toxic friendship, and a heartbreaking and heartwarming exploration of the relationships between mothers and daughters. TW for attempted suicide.