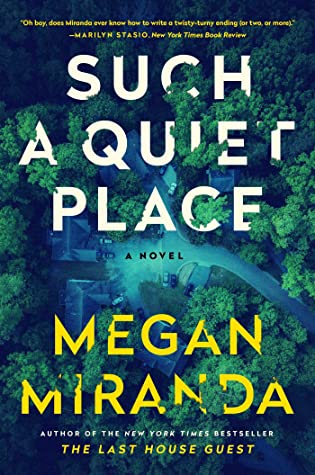 Fourteen months ago, Ruby Fletcher was convicted for the murder of her neighbours Brandon and Fiona Truett. The evidence against her contained security cam footage and testimony from her neighbours, including her roommate Harper Nash. Now, Ruby’s conviction has been overturned, and she’s back at Harper’s house, claiming her innocence and vowing to uncover the real guilty party.

From the blurb, I expected a page-turning domestic thriller. The title refers to the perceived peacefulness of the setting, a neighbourhood called Hollow’s Edge where the local homeowners’ association maintains a neighbourhood watch and enforces social mores. Such settings are always ripe for thrillers, since the genteel veneer often masks intra-community drama and simmering resentments.

On one hand, Such a Quiet Place does deliver such a thriller. There’s a sense of menace in Ruby’s return, with all the neighbours still convinced of her guilt and stressing over what kind of revenge she has planned. Harper, the narrator, also begins to receive mysterious, threatening notes, which threaten to reveal something she’s tried to keep secret. And about halfway through the novel, another death occurs, and new suspicions flare up. It’s a page turner, and Miranda is a skilled writer who keeps you guessing.

But mostly, to my surprise, I found the book sad. The truth behind the murders does hold menace, but the reasons actually turn out to be sadder and more ordinary than I anticipated. Beyond the central mystery around the murders, the novel delves into all the drama stirred up by the local homeowners’ association (HOA), led by neighbourhood queen bee Charlotte Brock. Still fully convinced of Ruby’s guilt, they decide she’s not welcome in the neighbourhood, snub her at the Fourth of July barbecue, and peer pressure Harper into evicting her from their home. Ruby is far from a likeable character — she does some shady things, and pretty much strong-arms her way back into Harper’s house — but I still felt bad for her with how much bullying she had to face from the HOA.

Because the HOA drives so much of the action in the novel, the story feels not so much a thriller as pointed social commentary wrapped up in thrillerish elements. Through her characters, Miranda prompts us to reflect on what and who we consider our home and community, and how complicit we become in maintaining an exclusionary social order.

For example, the neighbours all participate in an online message board, but the message board is open only to homeowners, and not renters. At one point, Harper reflects that all the renters got out as soon as they could after the Truett murders destroyed the sense of safety in the neighbourhood, while homeowners had invested too much equity to be able to leave so easily. But, while the murders likely did play a part in it, I can’t help but wonder how many of those renters moved out simply because they were treated as second-class citizens.

Another telling example is the Fourth of July barbecue, where Charlotte decides only residents are allowed to come, because they’re the ones who pay the HOA fees that fund the event. She gets pushback from neighbours who want to bring guests, and eventually caves, but not before snarking that with guests allowed, there may not be enough food to go around.

While Charlotte is the queen bee, all the neighbours are in some form or other complicit in the toxicity that sets them apart from ‘outsiders’. Miranda does a great job with Harper’s perspective on this, as the author manages to convey how much the HOA fosters a sense of belonging and close-knit friendships in the community while still exerting subtle pressure on residents to abide by their social norms, or else be outsiders in their own homes.

By the end of the novel, I realized how terrifying the story was in its mundaneness. We often see thrillers with taglines like “it can happen anywhere”, and with this book, Miranda succeeds in crafting just such a thriller, and in challenging us to consider how we engage with where we live.