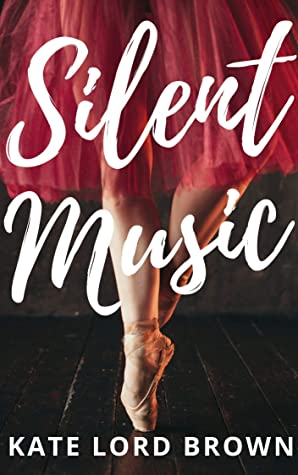 In 1960s New York, ballet teacher Tess learns that her husband Kit wants a divorce, just before their son Bobby announces he’s getting married. For the sake of their son, Tess and Kit agree to postpone the divorce until after Bobby’s marriage, but that poses a challenge, and old secrets come to light, when Bobby’s future uncle-in-law Marco starts showing an interest in Tess.

Silent Music is a quiet, lovely book. The developing relationship between Tess and Marco is sweet and tender, rather than passionate. We get hints throughout that Tess and Kit’s marriage has not been a happy one, and that Kit has been an uncaring, at times cruel, husband. So it’s heartwarming to see Tess’s confidence grow in the face of Marco’s unwavering admiration. There’s a lovely plot thread about a pair of shoes Marco designs for Tess to wear to Bobby’s wedding, and the final design turns out to be much bolder than Tess believed herself capable of wearing.

While it would have been very easy to make Marco simply a charming hero, somewhat akin to Andy Garcia’s Fernando in Mamma Mia 2, I like that the author has given him struggles of his own as well. As much as he helps Tess come out of her shell, being with Tess also gives Marco a fresh spark of life. Without giving too much away, there’s a secret he’s keeping from Tess, and the way this plot thread is treated shows how much Tess helps him live with this aspect of his life. Their love story isn’t super passionate or exciting, but rather the kind of love a couple settles into: comfortable and companionable.

From the book’s description on Goodreads, I thought there would be a lot more about Tess and Kit’s relationship in Hong Kong in 1939, and also a lot more about Tess’s career as a ballet dancer and ballet teacher. I was disappointed that this wasn’t the case. We do get a bit of history on their relationship at the beginning and towards the end of the novel, but otherwise, the story very much focuses on the weeks leading up to Bobby’s wedding.

I also ended up hating Bobby as a character. From being a loving son who was totally clueless about his parents’ marital issues, Bobby turns downright misogynistic, and outright slut-shames his mother. Kit rightly calls him out on that, and Bobby eventually changes his mind, but he was nowhere near sorry enough. I can understand that the author may have been trying to reflect social attitudes in the 60s, but I still really disliked Bobby, and downright wished his fiancee would leave him for someone better.

I also wish we’d learned more about Kit. He was a terrible husband, who married Tess for reasons other than love, and we get several hints of what those reasons are throughout the novel. But he still didn’t really seem fully fleshed out by the end. Likely, this is a case of the marketing copy being misleading — the book summary on Goodreads gave me the impression that the story would focus on Tess and Kit, and it took me a while to realize Marco was going to play a large part in this story. Still, I thought Kit’s character could have been better fleshed out.

Thanks to the author for an advance reading copy of this book in exchange for an honest review.