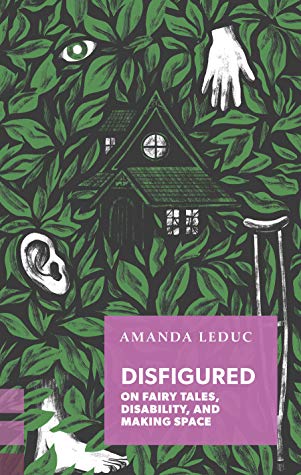 “In fairy tales, disability is often a metaphor, and that is itself a form of erasure.

But my cerebral palsy has never been a metaphor for anything. It has only ever been me — me, myself, my body.” [13%]

I’m not disabled, but I’ve always been a chubby kid and am now a plus-size woman, and I related SO HARD to Leduc’s thesis that fairy tales allow only certain types of bodies to be granted happy endings. Leduc also raises many good points on the trope of transformation in fairy tales and superhero stories, and the message therein that you must “overcome” your less-than-“perfect” body to get your happily ever after. There’s a lot of emphasis on “overcoming” your own obstacle, and considerably less emphasis on the role that a supportive community can play in making your world better overall.

There are so many gems in this book, and I wasn’t sure how to write a blog review because there’s just so much to absorb and to unpack. So I’m going to go with a full-on gush, and just post some highlights that I noted while reading.

And I have Quasimodo, misshapen and kind, who finds friends at the end of his story and is happy about, because that is the only kind if happiness he is allowed to have.” [32%]

The book also made me reflect on my own thoughtless privilege. Leduc shares an anecdote about how she once left a lindy hop dance class after her partner teased her for concentrating too hard and taking things so seriously. That reminded me of a ballroom dancing class in high school PE where I teased my dance partner for the same thing. My immediate response to Leduc’s story was defensiveness — my dance partner wasn’t disabled, and obviously, if she had been, I would have been more understanding about it. But the truth is that my dance partner shouldn’t have to disclose a disability for me to respect her approach to dancing. Whatever my partner’s reasons were for concentrating more than I was on the dance, they were valid, and I shouldn’t have made her feel self-conscious about it. (My teasing also caused us to fall behind from the group, and then bump into our classmates when I sped up our pace to try and catch up. So, in hindsight, my partner may have had the right idea on the concentration front.)

My main takeaway is something Leduc says near the end, which is basically that we need to make space for different stories, where the protagonist with the different body gets their happy ending not because they overcome obstacles on their own but because they have a community that pulls them through. As Leduc says, “My walk, my legs, my body — I am, all of me, a feature. (We are, all of us, a feature.)” [81%]

It’s been a while since a book has affected me this much, and I can only imagine its impact on disabled readers. Read it.

Thank you to the Coach House Books for an e-galley in exchange for an honest review.