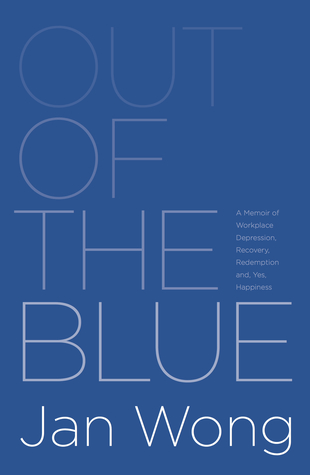 Out of the Blue is a powerful and moving memoir of workplace depression. More importantly, it’s also a deeply troubling glimpse into the cold, sometimes ineffective support from corporate Employee Assistance Programs (EAP).

Jan Wong shares her experiences as a journalist with the Globe and Mail. She enjoyed covering hard-hitting stories and was used to engaging with controversial issues, so when an article she wrote on a school shooting in Montreal met with major public backlash, she had no idea things would get as bad as they did. First, and rather graciously in my mind, she prefaces her account by admitting that she writes about her experiences with supervisors and colleagues through the filter of having been battling major depression at the time, and that some of the things people said to her back then ended up seeming not as harsh when she looked back at it years later.

Then she tells us, with heartbreaking candour, about how isolated she felt when she read the Globe and Mail’s fairly politic (read: lukewarm) response to the backlash against her. When she receives a death threat and experiences massive anxiety over it, they do offer her some time off, but the rest of her story shows the unfortunate perception in many work places that a mental health experience is a single episode that can be ‘solved’ with a mini-break.

Jan had the nominal support from her EAP (provided by Manulife), but as her time away from work continues to lengthen and with there being no defined end date in sight, the system slowly begins to withdraw its support. Suddenly, along with dealing with depression and anxiety, Jan also had to constantly ask her doctor to provide her with documentation of her condition and also to take test after psychological test to prove that she had a legitimate medical requirement for the paid time off. Not only was she dealing with the stress over the death threats and the isolation from her peers, but she also had to deal with the stress over all the paperwork she had to complete in order to continue receiving EAP support. She writes about how her EAP case worker flat-out told her she wasn’t depressed, and how she had to seek reassurance from her doctor that she still was, indeed, depressed. (As context, the psychological test her EAP had her take later confirmed that she was indeed depressed, and that the EAP case worker was dispensing a medical diagnosis that frankly had no basis in fact.)

This book made me angry, and it also flat-out broke my heart. It’s easy to lay the blame solely at the Globe and Mail or on Manulife, for how they responded to Jan’s mental health crisis, but even more troubling is that this is possibly the situation in many other companies and many other EAP programs across Canada. And given how many people are precariously employed, it’s especially troubling to imagine all those who are working but don’t receive benefits, and don’t even have the limited access to resources that Jan managed to receive.

Perhaps one of the most heartbreaking moments is when Jan realizes she actually wants the doctors to conclude that she has depression. Because otherwise, that would mean that there isn’t a quantifiable / manageable reason for the struggles she was going through. And because otherwise, the EAP case worker and other people who have subtly hinted that they thought she was faking would be proven right.

Equally heartbreaking is when the doctor recommends Jan goes on a trip to improve her mental health. The trip gives Jan some much needed distance from home and from her workplace, and does actually succeed in making her feel good. Until it is used against her at work, with the rather uninformed logic that if she was well enough to go on a holiday, she should clearly be well enough to get back to work. It hurts to see something that could cause such happiness and provide such relief from the symptoms of depression used as a weapon, and I felt for her so much when I read about that.

This book also raises awareness about how depression can be very situational. Many of us are aware of post-partum depression, and also of depression that comes and goes with no defined reason, and I think it’s important to also be aware of the experience Jan had with depression, where it was very much triggered by a specific incident, and very much exacerbated by a particular work environment. The book does end on a happy, hopeful note, as Jan does eventually escape from the situation that kept her under such stress for such a long time.

Overall, Out of the Blue is not an easy read, but it is a powerful one. And it raises a lot of questions about how companies can better support employees dealing with mental health situations.

Thank you to Gooselane for a copy of this book in exchange for an honest review.