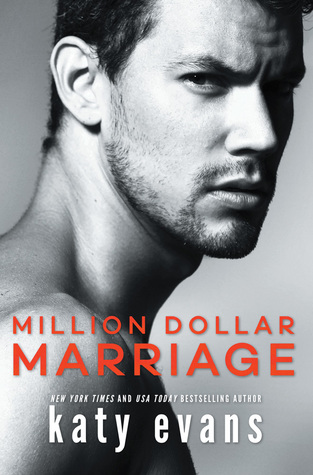 Nell is a super nerdy PhD who reads Baudelaire and Chinese philosophy for fun. Luke is a tattooed bad boy who owns and runs a dive bar. So when they have to get married to compete in a competition reality show for a million dollars, it’s purely a marriage of convenience, and both have full intentions of annulling the union after the competition. Except while ziplining, running through a maze tied together, and performing a host of other Amazing Race-type challenges, they start getting to know each other better. And the incredible sexual chemistry between them eventually develops into actual love.

I absolutely loved Million Dollar Marriage. I love the concept of getting trapped together for a chance at a million dollars, and I love the chemistry just buzzing between the two leads. I love how Nell is an unapologetic nerd, who believes she’s good only for her brains and is genuinely taken aback when she learns that Luke’s favourite part about her is actually her freckles (awww!). And I love how Luke immediately assumes he’s the brawns in the partnership, only to be genuinely moved when he learns that Nell thinks he’s actually really smart. Their relationship may have started off as opposites attract, but I love that Luke was already becoming attracted to her from the very beginning, and that despite their arguments, they actually worked together well for the challenges.

I just outright fell in love with Luke. He’s hot and sweet and considerate. There are moments where Nell’s fears could cost them a challenge and the chance at a million dollars, but throughout the story, he completely respects her boundaries, and lets her take the lead. I also love how he really listens to her, especially in an intimate setting. When she tells him she’s never come during partner sex, he acknowledges her previous partner must have just been bad at sex, but he doesn’t really harp on it. Rather, he takes things slow and gentle and (spoiler alert) pleasantly surprises her with her response. He also respects her desire to save sex for someone she truly loves, and acknowledges that since they barely know each other, she likely isn’t in love with him yet. I love a good alpha hero as much as any other romance reader, but I have to admit, I’m totally loving how gentle and understanding Luke is. He is labelled the Prince Charming of their TV show, and it’s easy to see why.

Nell may be a bit more difficult to love, just because she’s so prickly. But I love how relatable she is. Her hesitations on sex and relationships are rooted very much in a bad, I’d even say abusive, relationship she had genuinely thought was the one, and I also felt for her during the glimpse we had of her father also being a controlling jerk. She’s dealing with a lot, and I like that she takes a while to open up to Luke.

I also love that Nell is a straight-up PhD, and that throughout the filming, people refer to her as Dr Carpenter, or to her and Luke as Dr and Mr Cross. Her PhD is in comparative literature, which is just delightfully nerdy, but the significant part is how much people rightfully respect the title she’s earned. Given how hard it is for a woman to gain respect in academia, much less for a humanities degree like comparative literature, I love that the other characters simply accept it as Nell’s due, and give her the respect she deserves.

Overall, I absolutely loved this novel. I wasn’t too happy with the little incident near the end that almost risked their happily ever after, but I admit it’s true to the characters. I also totally melted at Luke wanting to introduce Nell to his grandmother — how adorable is that?