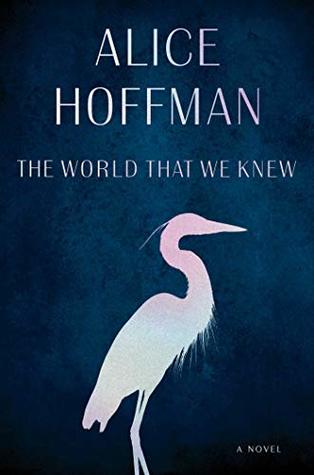 Just when I thought I know what to expect from a WWII novel, I come across The World We Knew. Known for novels like Practical Magic, which weaves magic into the real world, Hoffman delivers a novel where magic — dark, forbidden magic — is a tool by which a Jewish mother keeps her daughter safe from Nazis. It’s a lovely infusion of hope into the bleak reality of war, but more importantly, it also raises questions of how far women are willing to go to protect the ones they love.

The novel follows the life of Lea Kohn, a twelve year old girl escaping Nazi Germany. Her mother Hanni has commissioned a rabbi’s daughter Ettie, to create for her a golem, a creature made of clay whose very existence has the single purpose of keeping Lea alive and safe. The catch is that once Lea is safe and no longer in need of protection, she must kill the golem so that it doesn’t grow too powerful to control.

The World We Knew is a moving, fiercely emotional novel that practically bursts with love. Along with the love between Lea and her mother, the girl also can’t help but grow affectionate towards the golem Ava, who becomes a maternal figure to her during their escape and who therefore becomes almost impossible for Lea to kill. There are moments where Lea sees her mother in Ava, or remembers how much her mother loves her because of something Ava does, and it’s absolutely heart-wrenching to read because we know what her mother has sacrificed for Lea’s safety. Alongside that is the heron who follows Lea and Ava throughout their journey, who is linked to the golem in some way that is never fully explained, but that feels just as tangible as the bonds between the human characters.

There is also the fierce love between Ettie and her younger sister, whose safety is the reason Ettie agrees to create the golem in the first place, even though such magic is forbidden. Their escape doesn’t quite go as planned, and the experience shapes Ettie’s determination to help rebel forces take the Nazis down.

Despite its setting in a world filled with hate, the novel’s overarching message is that of love. There are many tragic moments throughout, many instances of sacrifice and of fear, but ultimately, we are left with a promise of hope. And even though the literal angel of death makes several appearances — at one point, unable to see Ava because she is not created by God (I forgot how Hoffman phrases this, but it’s beautiful, chilling and heartbreaking all at once) — the overarching feel is a celebration of life.

While the story is fantastical, kernels of it are rooted in reality. In her letter to the reader, Alice Hoffman writes about a woman who approached her at a book event, wanting her life story to be told. Like Lea, the woman was born Jewish, but was then sent to a convent during World War II to be raised Catholic. Unlike Lea, the woman didn’t have an Ava to protect her, and so while she survived the war, her reality is likely a lot bleaker than the story in this novel.

In that same letter, Hoffman writes, “Fairy tales tell us that we may be lost, we may be forsaken, but there is a path.” And perhaps that’s why the fairy tale treatment in this novel resonated so much with me. Despite all the horrible stuff happening in the world, Hoffman’s world promises a benevolent force protecting you from experiencing anything too horrible. Yet even that reassurance is a complicated one, as it requires much sacrifice and possibly a compromise of one’s own values. Like many fairy tales, the hope Hoffman offers is an ambiguous, complex one filled with foreboding. And that, paradoxically enough, makes it feel even more realistic, and therefore possible, much more than an uncomplicated happily ever after would.

Thank you to Simon and Schuster Canada for an egalley of this book in exchange for an honest review.