The Storm Crow is a thoughtful YA fantasy about a world where magical elemental Crows hold the key to power. Princess Thia of Rhodaire has trained all her life to be a Crow rider, but her plans are derailed with the kingdom of Illucia conquers her nation, kills all the Crows and destroys all remaining eggs. Thia’s older sister Caliza, who has become queen at their mother’s death, is forced to agree to a marriage between Thia and Prince Ericen of Illucia in order to protect their people. Thia heads to Illucia with her bodyguard and friend Kiva, and, more importantly, with a Crow egg she found hidden in rubble. A Crow can tip the balance of power in Rhodaire’s favour, if only Thia can figure out how to hatch the egg and stay safe in an enemy kingdom.

First, I love how Josephson really delves into how the trauma of Illucia’s attack has impacted Thia. Thia develops a deep depression (and to Josephson’s credit, Thia actually says this outright: “I’m depressed”) that keeps her secluded from the rest of her kingdom for months. She also experiences long-term PTSD with respect to fire, because of the attack. And again, I like that this affects Thia without ever devolving into treating her like an object of pity. (There’s a rather dramatic scene involving fire, but more importantly, there’s also the subtle verbal jabs about her decision whether or not to wear gloves.)

The pacing is somewhat slow, especially considering this is a duology and not a much longer series. Part of this is that Josephson keeps us firmly in Thia’s point of view, so while the author peppers hints throughout that other characters are doing important secretive things in the background, we spend most of our time with Thia waiting for some clue to hatch the Crow egg.

I also wish there was more clarity about the Crows themselves, given their importance to the plot. The author included an appendix with the types of Crows and another appendix with all the kingdoms (including a princess that was believed to be dead but will likely feature prominently in the next book), but included little of that information in the story itself. So when characters discussed the oddity of a Storm Crow exhibiting Earth Crow powers, the significance was lost to me, because I didn’t understand what the different types of Crows were in the first place, where their powers came from, or why it all matters.

I do like that the love triangle seems to favour the unconventional choice (similar to The Hunger Games, where Katniss chooses Peeta over Gale), but I do wish there was more chemistry between the characters.

Given the book description, I was also somewhat disappointed that Caliza didn’t play a larger role in this story. I love stories about sisters, and that part of the blurb really interested me. But more than that, while I was interested in how Thia could possibly hatch the egg and launch a rebellion, I’m also really interested in how an inexperienced queen learns to play the game in order to keep her kingdom safe.

Still, overall, The Storm Crow is a good read. I like the subtle ways in which characters tried to gain or show their power, I like that the heroine is heroic while struggling with depression, and the idea of elemental Crows promises for a kickass and thrilling uprising ahead. 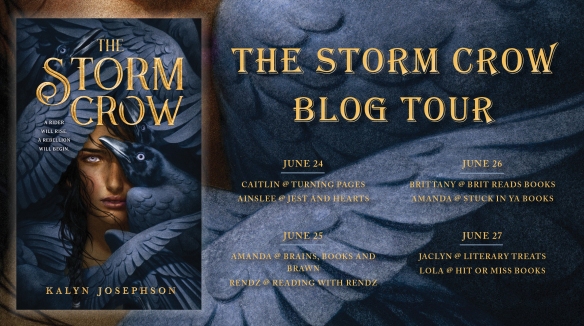 Thanks to Raincoast Books for an advance reading copy of this book in exchange for an honest review.