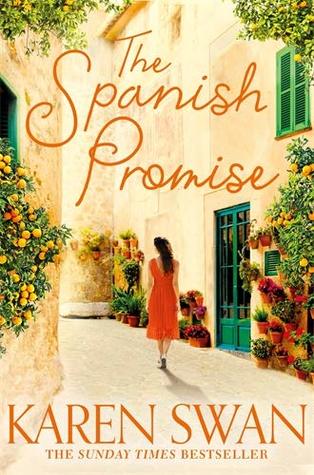 A Karen Swan novel is almost inevitably a promise of escape to an exotic locale and the luxurious lifestyles of the super rich. Her books are full of heart, and a wonderful delight to lose oneself in. The Spanish Promise is one such book. It tells the story of a wealth counsellor, Charlotte, who is hired by a wealthy Spanish family to convince a woman they’d never met to give up her claim to a massive inheritance from the family patriarch. To do so, Charlotte travels to Spain mere days before her wedding, and learns that the truth behind the inheritance is more complex than she and the wealthy family had initially believed.

I enjoyed Charlotte’s story. I loved the travel to Spain and the luxurious estate she ends up staying in. I also loved meeting the unwitting heiress Marina, and seeing the reveal of her connection to the Mendoza family unfold. The subplot about Charlotte’s love life — her impending marriage to a man she doesn’t really love and her coincidental reunion with an old flame — is tied in well to the main plot and to Charlotte’s personal growth as a character, but was nowhere near as interesting to me as the rest of the story.

Rather, the story that really hooked me was the secondary storyline, set in 1930s Spain and featuring a woman named Nene living during the Spanish Civil War. Nene belongs to one of her region’s wealthiest landowner families. Her best friend growing up is a boy named Santi, whose family works at the estate, and while Nene herself strongly believes that wealth shouldn’t be conflated with worth, her background prevents her from fully being part of Santi’s world. The tensions between Nene’s and Santi’s families erupts as the Civil War breaks out, and Nene must decide where she stands.

I absolutely loved Nene’s storyline, and often found myself wishing to hurry up Charlotte’s sections so we could get back to the historical part of the story. I loved Nene’s friendship with Santi. I hated what her brothers did to Santi’s family just as much as I hated what Santi did in retaliation. I feared for Nene’s safety during the Civil War, and felt for her as events unfolded with seeming inevitability. Nene’s storyline and Charlotte’s eventually converge, and Swan does a good job in showing us the parallels between both heroines. But it was Nene’s story that kept me hooked, and that formed the emotional core for the story.

The Spanish Promise is a wonderful escape and a moving story about family and love. I loved it.

Thank you to Publishers Group Canada for a copy of this book in exchange for an honest review.