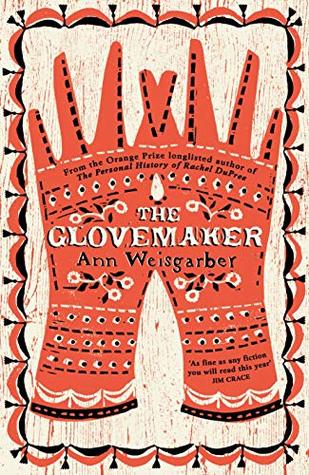 I don’t know much about Mormon history, so it was interesting to learn about this part of their people’s past. Basically, Mormons in 1888 Utah (not sure about now?) believed that if a man had multiple wives, that would add on blessings for their family and ease their way into heaven. But polygamy was against US law, and so lawmen hunted down and arrested Mormon men with multiple wives. The Glovemaker takes place in a small community called Junction, where two out of its seven families have set up somewhat of an underground railroad to help Mormon men on the run escape the law. It’s the first novel (I think?) I’ve ever read with a Mormon protagonist, and it was fascinating to read about this little-known (to me, at least) bit of history.

The Glovemaker takes on a pretty grim and uncertain period in Mormon history, and even alludes to a major historical event where Mormons were (possibly wrongly?) accused of killing a group of travellers (The Massacre of Mountain Meadows, for anyone interested in learning more). The novel could have gone large and sweeping in scope, detailing the breadth of Mormon experiences as many of them hid, or ran from, the law in order to practice their faith in peace.

Instead, the novel goes small, and becomes incredibly more powerful as a result. The story zooms in on Deborah, a woman whose husband went missing on his last business trip, and her neighbour and friend Nels, who help a stranger on the run. This particular stranger’s arrival is unusual because it happens in winter, when most lawmen do their arrests in better weather, and also because the lawman hunting him appears to have followed him from another state. Things don’t go quite as planned, and the residents of Junction must make difficult choices between doing their moral duty and keeping their loved ones safe.

The entire story takes place within two to three days, and while the action overall was fairly slow, I found myself glued to the page. Deborah and Nels both undergo an intensely emotional journey over those few days, and I was completely and utterly hooked. I love the tension between their personal codes of ethics and their more primal need to survive. Even when I knew what the ‘right’ choices were, I still rooted for these characters and wanted them to do whatever was necessary to keep their community safe.

The Glovemaker is a heartfelt, heart-wrenching, and heart-warmingly intimate page turner. Weisgarber takes us right into the hearts of these characters and compels us to ask ourselves: in their shoes, what would we have done?