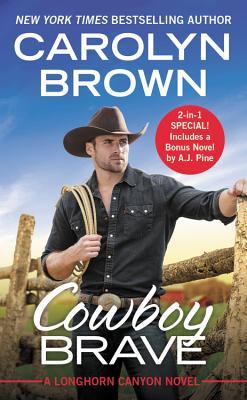 Cowboy Brave is a sweet city girl / cowboy romance. Emily Baker is the Programs Director at a seniors centre, and books a week at Justin Maguire’s ranch for a group of residents who call themselves “The Fab Five.” Justin is attracted to Emily pretty much from the get-go, but his mother is less enthusiastic about the relationship. And while Emily is attracted to Justin, she has also chosen to leave the ranching life behind for city living, and is reluctant to start anything serious with a cowboy.

While Emily and Justin’s relationship was nice, I found that the best parts of the novel were with all the stuff going on beyond the romance. The Fab Five were fantastic — I can totally imagine them having their own sitcom, and I’d love to see them have their own romances. I also love Emily’s best friend Nikki, who is pursuing her nursing degree and is dealing with some heartache of her own. I found her a compelling character, and I’m excited to see she has a romance of her own coming up. I also really loved the family dynamics, with both Justin and Emily’s families. While there are various sources of friction with both families, there’s also a very clear bond, and I love seeing such strong relationships amongst the siblings and with their parents.

Emily and Justin’s romance didn’t quite hit the mark for me. I think because it wasn’t quite angsty enough to be a dramatic romance, nor was it heartwarming enough to give me all the feels like a Hallmark Channel type movie. And while the book itself was funny, most of the comedy came from the side characters, and the romance itself was pretty straightforward.

I also didn’t quite understand Emily’s reluctance to re-enter the ranching life with Justin. She had initially left it because, as the only daughter in her family, she was expected to do the paperwork and not the physical jobs that she actually enjoys. But when she spoke about it with Justin, he was pretty chill about her doing the tasks she actually enjoys, and this was made clear pretty early on.

Still, overall, I enjoyed Cowboy Brave. The romance was solid, the main characters likeable, and the supporting characters fantastic.

Thank you to Forever for an egalley of this book in exchange for an honest review.