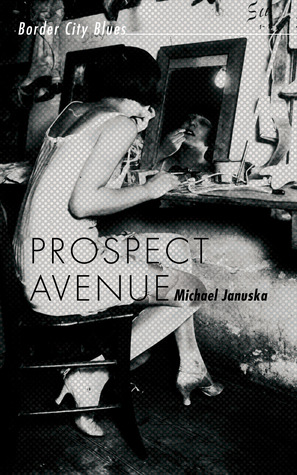 In Prospect Avenue, bootlegger Jack McCloskey rescues the survivor of a bad smuggling deal and gets caught up in a series of murders. From the cover and the description, I’d initially expected classic crime noir along the lines of Raymond Chandler — Januska’s style isn’t quite as hard-boiled. Rather, the book reminded me a lot of Boardwalk Empire, so if you enjoyed that TV show, you should definitely check this book out.

I admit it’s not really my type of story, and while I enjoyed parts of the book, I never really got hooked by it. But I think that’s mostly a matter of my preference rather than anything about the book at all, because the writing was strong.

I like the light humour sprinkled throughout the book. In particular, McCloskey’s girlfriend Vera Maude provides a bit of welcome comic relief as she plans a wedding and reluctantly allows McCloskey to give her a driving lesson.

I also like how the book confronts the racism of its time. The man McCloskey rescues is Chinese, and McCloskey tries to give him a more stable future by getting him a job at a Chinese restaurant. Characters taste Chinese food for the first time, and I like how Januska shows their wariness at the unfamiliar flavours, and also how they end up enjoying some of the dishes without over-the-top exclaiming at the wonders of this new cuisine. There were characters who were being racist, and McCloskey calls them out, but in a way that still felt realistic to the time period. It’s how I imagine many Americans probably did respond when Chinese restaurants began opening up in the country, and I like that Januska acknowledges the problematic attitudes of the time without making the characters feel too modern.

McCloskey as well is an interesting character. I like how he clearly enjoys his job and is good at it, but is also trying to work his way toward a more legitimate business. It’s one of my favourite tropes in this genre, and makes for a compelling character arc.

Thanks to Dundurn Press for an advance reading copy of this book in exchange for an honest review.