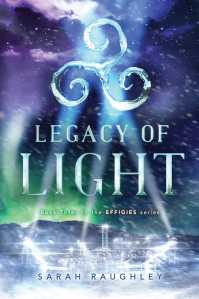 In Legacy of Light, Sarah Raughley has crafted a fittingly epic end to her Effigies trilogy. Maia, Chae Rin and Lake are on the run, being hunted as terrorists, and Maia’s former idol Belle has gone rogue. Maia’s twin June, who died in a fire years ago, is somehow back and wreaking havoc in Maia’s name. And Saul is still obsessed with finding Maia so he can use her to get in touch with the consciousness of the original Fire Effigy.

I will highly recommend re-reading the first two books first before going into this one. It’s been a year since I read book two, and I spent a lot of the first half of the book feeling thoroughly confused by all the references to characters and situations that I could no longer remember. Raughley drops us right into the middle of the action, and never lets up on the pace, which makes for a heart-racing quick pace of a thrill ride, but also assumes readers understand what’s happening.

I love that this book delves deep into the mythology and origins of the Effigies. We finally learn how they got their powers and why the powers are passed on from one generation of girls to another throughout centuries. We also finally understand what the phantoms are, and why they are so closely linked to the Effigies and the mythos surrounding their powers. That part of the book was really strong, and I love the intricacies of the world Raughley has created.

I also love the last few chapters of the book, as Maia comes to terms with the uncomfortable reality of her destiny, and things that happened earlier on in the series (e.g. why the death at the end of book 2 had to happen, why the deaths in Maia’s family had to happen) come full circle. Raughley is fantastic at creating memorable endings, and this book is no exception. Tough decisions had to be made and all victories require sacrifice. Raughley pulls back just enough to keep this book from a fully tragic ending, but she does take us through a gamut of emotions along the way, and continues to emphasize her theme on the emotional toll of heroism.

I wish the book had been shorter and possibly tighter. While the ending was strong and a lot of the building action had a purpose, the book often felt like the third movie in The Hobbit trilogy — battle after battle after endless battle such that it felt repetitive and draggy after a while. The final third or so of the book was so strong and compelling that I wish a lot of the rising action had been condensed more.

Still, overall, Legacy of Light — and the Effigies trilogy as a whole — has the feel of an incredibly kickass graphic novel or blockbuster movie trilogy. Raughley has created an intricate world of magic and the emotionally charged consequences of such power in the world, and I think it will translate wonderfully into a visual medium.