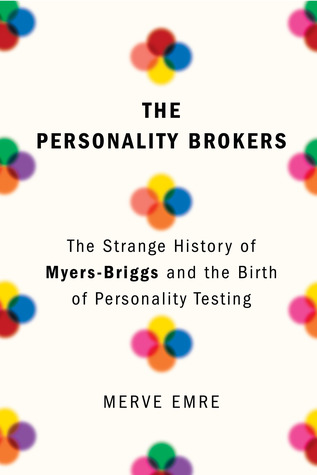 I love personality quizzes. I love finding out if I’m a Hufflepuff or a Slytherin, or if I’m a golden retriever or a chihuahua, or some other classification based on the thousands of online quizzes out there. The Myers-Briggs test, however, always seemed to me to be the gold standard. I can be a Hufflepuff at one quiz and a Slytherin at another, but no matter what, I knew I could count on myself to always be an ENFP. And when there are times I act in a way that doesn’t quite fit within that spectrum, I figure it was just a temporary glitch and, at heart, the Myers-Briggs result still holds true.

This is why The Personality Brokers was such an eye-opener for me. Merve Emre is skeptical of the science behind personality testing, and as I read more about the history behind its development, I found myself becoming more skeptical as well. Emre admits at the beginning that there were points in her research where she wanted to cheer the creators on — Katherine Briggs and her daughter Isabel Briggs Myers were amateur behaviourists (no scientific or psychological training) who were women fighting to make a mark in a male-dominated industry and also working to make behavioural science accessible to laypeople. I didn’t know that the Myers-Briggs test was created by women, nor did I ever imagine it was created by non-scientists. (I had to confront my own unconscious bias, because for some reason, I was certain Myers and Briggs were a pair of old white male psychologists.) So, like Emre, I too began by cheering them on, and wanting to celebrate in their long-lasting success. And to some extent, I still do — both women created a very useful tool that can provide some insight into your psyche at a point in time.

But then I learned that the Myers-Briggs test actually began with a super religious and moralistic stance, Katherine Briggs trying to figure out how to develop a morally upright child and using her daughter as a test subject. Emre also reveals how reductionist and, in a way, stereotype-y the test evolves into, with companies actually using the test to determine if a candidate was a good match for a job or not, and militaries using the test to decide on whom they should hire for particular jobs like espionage.

I also learned of the racist and sexist attitudes of the creators, that have likely made it into the structure of the test. For example, Katherine (or was it Isabel?) often said that women were more naturally nurturing than men, and therefore better suited for a caregiving role. Isabel also wrote a detective novel where generations of a family committed suicide because of a mistaken belief in African heritage, and Emre wonders how uncritically Isabel addresses such beliefs. Granted, both women were products of their time, and cannot be judged by today’s standards, but a lot of the present-day test was created by Isabel based on her mother’s work. Their beliefs therefore raise the question of how much the test is shaped by a particular point of view, and how much it was tailored for a particular audience (i.e. white, middle class people of their time).

Reading the book has made me question how unthinkingly I’ve taken the test results as immutable fact, when that isn’t really the case. Emre raises a good argument that the test assumes personality is fixed and can never be changed, but studies show that people taking the Myers-Briggs test more than once can get different results. On a personal level, I may feel like the ENFP classification fits me now, but I can also easily think of times in my life when I would’ve thought of myself as fitting elsewhere on the spectrum. Perhaps it’s the mutability of Harry Potter-type Buzzfeed quizzes that’s more telling than a personality set in stone from birth.

As I said, I love personality quizzes, and I still think the Myers-Briggs test is good for understanding oneself at particular points in one’s life. But after reading The Personality Brokers, I realize how important it is to take these results — as with any personality test — with a grain of salt, and not rely on it too much to shape your life. Emre gives some examples of people who’ve changed their career paths because of their Myers-Briggs results, and while we don’t learn how it turns out for them, it’s also worth considering if a single test should be the basis of such big decisions.

The Personality Brokers is a fascinating book. I don’t read a lot of nonfiction, but Emre has a compelling writing style that kept me hooked throughout. I learned a lot about the history of personality testing, and the fascinating lives of the women who created this test with such an enduring legacy.