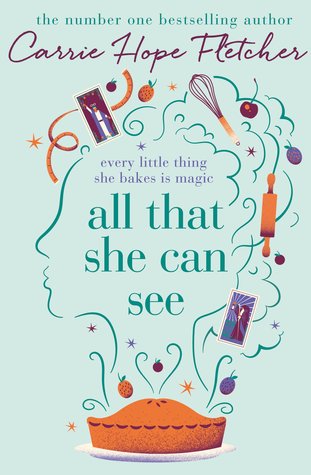 All That She Can See has a charming premise: Cherry is a baker who has the magical ability to see others’ negative emotions, and the power to create baked goods that can counteract those feelings. While her cakes and cookies don’t get rid of emotional baggage completely, they at least provide temporary relief, and even just spending time in Cherry’s bakery can make you feel good. Until she meets Chase, a man whose magical ability to see others’ positive emotions has made him bitter and cynical. When he and Cherry meet, Chase decides to sabotage her business, and things somewhat spiral out of control from there.

As I said, it’s a charming premise, and I was all set to enjoy this book like I did Chocolat and Like Water for Chocolate. Fletcher’s execution felt a bit stilted, and failed to pull me into a world of magical realism as the other two books did, but I still liked the characters in Cherry’s town and the stories they brought.

Unfortunately, partway through the book, the real villains appear, and what began as a charming small town tale of magic turned into a high-speed action thriller sequence. The shift in tone took me somewhat out of the story — the battle against these bad guys didn’t interest me as much as the gradual unfolding of the lives in the town. Worse, this part of the story led to a lot of heavy-handed pontificating about the importance of coming to terms with all your emotions, both good and bad. It’s a valid moral, and one the story was clearly moving towards even in the charming small town parts, and I only wish the book never got as heavy-handed as it did in driving it home.

The romance as well felt forced. While Fletcher does a good job in explaining the hero’s behaviour, I never quite bought into the appeal. It felt more like friendship borne out of some variant of PTSD than an actual attraction.

Still, overall, this is a light, easy read, with a likeable heroine.

Kudos as well to the book designer. I love the cover design and the inside covers!