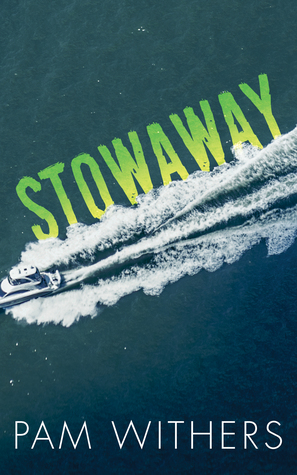 I should preface this review by admitting that, with everything going on today in the US around undocumented immigrants at risk of deportation and refugees seeking asylum being separated from their children at the border, I’m already predisposed to be wary when encountering a book about human trafficking, particularly when the story itself consistently uses the term “illegal immigration” and is a high-energy adventure-at-seas tale.

As an adventure story, Stowaway reminds me somewhat of the action-packed scenes of Hardy Boys or Jonny Quest, with each chapter revealing a new twist or hurdle to be tackled. Pam Withers is a talented writer, and the story is high octane and exciting. While the hero and his friends get into one scrape or another, we know a bit of ingenuity and courage will get them out of trouble eventually. It’s a fun ride, and I think children interested in an adventure story will enjoy reading this.

The book is about a Canadian teen, Owen, who stows away on a boat for kicks, and unwittingly stumbles on a people smuggling operation: the captain and his first mate Arturo are transporting a group of private school boys from Guatemala into Canada. The captain decides Owen knows too much to let him go, but Owen rallies Arturo and the other boys to work together to free themselves from the captain.

Some things in the story did make me uncomfortable. First, Owen was really excited in the beginning to help his Coast Guard friends deal with illegal immigration. About halfway through the story, it’s made explicit that the Coast Guard’s target is really people like the captain, who take payment from the boys’ parents but don’t actually get the boys safely into Canada. (In this story, the captain sends the boys to labour camp unless the parents pay more money, and then ends up trying to kill them.) The problem is, it’s no longer as easy to take for granted, as Owen does, that people in authority have these boys’ welfare in mind. While I’m sure the author intended Owen and the Coast Guard’s motives to be mostly about protecting immigrants from unscrupulous people like the captain, I also couldn’t help but feel like Owen’s glee also had to do with protecting Canada’s borders from the boys themselves, and that turned me off.

I was also wary about the idea of Owen as a Canadian being the one to save the Guatemalan boys, mostly because I’m a bit tired of the white saviour trope. In fairness to Withers, the Guatemalan first mate Arturo has just as much of a narrative voice as Owen (they alternate chapters) and turns out to be just as much a hero as Owen is. Still, Owen was the one mostly driving the heroic actions, and convincing Arturo and the other Guatemalan boys to get on-board, and I’m kinda meh about that.

There also seemed a very clear-cut dichotomy between Guatemala as impoverished and filled with fear and violence, and Canada as the land of hope and opportunity. To be fair, there’s a valid reason the boys’ families wanted them to immigrate in the first place, but all the boys kept talking about was how bad it was in Guatemala and how much better it’ll be in Canada, and I couldn’t help wishing the portrayal of Guatemala was more nuanced. Even if they went to Canada to escape bad conditions in Guatemala, isn’t there anything they miss about their old lives and their country of origin?

Those are things that detracted from my personal enjoyment of the book, but overall, the book was a strong adventure story. There were a lot of twists and turns and feats of daring, and Withers is a strong writer who keeps the action on high the entire time. There’s also a nice emotional subplot about Owen’s brother that fuels his desire to help the boys on the boat, and I love the way that subplot played out.

Thank you to Dundurn Press for an advance reading copy of this book in exchange for an honest review.