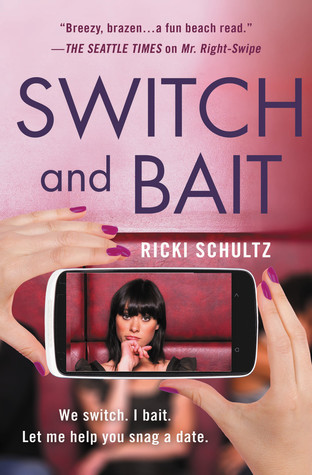 Switch and Bait is an online dating take on Cyrano de Bergerac. Blanche manages a bookshop by day and helps single women find quality men online by night. Her slogan: “We switch, I bait. Let me help you snag a date.” Blanche’s latest client, Ansley, is a sweet woman who becomes accident prone around attractive men. (Ansley’s claim to fame is that she was banned from the Smithsonian for life after knocking over their stegosaurus display. As a museum nerd, I’m thinking: that’s unrealistic, but also hilarious!) Ansley’s latest match is Henry, the brother in law of Blanche’s best friend and also a one night stand Blanche is still attracted to but somehow can’t help insulting every time they see each other.

Switch and Bait is a quick, breezy, entertaining read. I loved the online banter between Henry and Blanche-as-Ansley, which is both cheesier and cleverer than most online dating conversations: Henry messages, “Of all the dating apps in all the world, she swipes into mine.” Blanche-as-Ansley responds, “Here’s looking at you, bae.” And off they go into classic movie references.

There’s also a fun subplot involving a bookstore customer named Cliff, who looks just like Justin Trudeau and is incredibly good with his hands.

But overall, the central romance was just okay. Beyond the obvious conflict that Blanche was supposed to set Henry up with Ansley (which given how nice Ansley is, probably could’ve been addressed with a little communication), the major reason that keeps Blanche and Henry apart didn’t seem super fleshed out. She thinks they’re incompatible because he’s a Republican and she’s super liberal, but Schultz never quite shows Henry having problematic beliefs. When politics come up in the book, it’s mostly Blanche and Henry showing how they can be open-minded and cross the political divide, which helps show how they can get along in the end, but doesn’t quite address why their political affiliation was such a deal breaker.

I personally found Ansley a more compelling character, and laughed at all the scenes that featured her clumsiness. I was cheering her on all the way in her search for love, and I had a lot of fun with her part of the story.