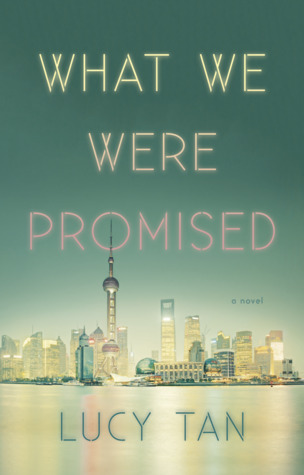 Wei and Lina Zhen immigrate to America years ago, and have just recently moved back to Shanghai with their daughter Karen for Wei’s job. Wei has to deal with his sense of failure at being a manager without a clearly defined role for an American company rather than being an engineer whose work puts China on the map. Lina has to come to terms with her life as a tai tai, a stay-at-home wife who can’t be called a housewife because she’s too rich to actually do any housework. Wei and Lina also have to deal with the arrival of Wei’s long-lost brother Qiang, whose business involves criminal activities and who had had a secret romance with Lina when they were teenagers. Observing it all is the family ayi Sunny, who is very much aware of the wealth and status that distinguish this family’s life from her own, and can also see the various tensions the family struggles to hide.

What We Were Promised tells a story that likely rings true for many families in Asia and around the world, but is (to my knowledge) rarely told. What is it like to come back home, and realize you may now be more foreigner than local? I love how Tan shows the difference in the way Sunny and the other servants view the Zhens versus the way they view wealthy non-Chinese foreigners. The Zhens’ excesses cut more deeply, because they were visibly once on a more equal footing, and so the current differences in circumstances seem more obvious.

I love the family tensions that erupt on Qiang’s return. The scene of their first dinner together is a masterclass in writing: every word simmers with barely restrained emotion. There’s a great moment where Wei briefly wonders how Qiang could afford a Rolex, given how shabbily he’s dressed, then Qiang makes a comment on how you need to dress rich around the rich, and Wei realizes that Qiang thinks his outfit makes him look rich. “There’s a difference between dressing rich and dressing wealthy,” Wei thinks (an incredible quote!), and this is driven home with heartbreaking accuracy as we realize that, for all Qiang’s efforts, the building concierge sent him up the servants’ elevator.

The class differences are further heightened by Wei’s immigration to America, and the social status this accords him. Again, Tan highlights this with beautiful subtlety. Wei chooses to say something to his daughter in English, which Qiang doesn’t understand, and Qiang pretends not to notice. Qiang calls Wei out for promoting American products instead of Chinese innovation — Wei gets defensive because he secretly agrees and feels guilty about it, but one wonders if Qiang himself is also secretly jealous of Wei’s connections abroad.

I love the character of Sunny, and how her distance from the family in both wealth and cosmopolitanism sets her up as the perfect foil to reflect the family’s tensions and also to further heighten the themes around class and social status. Sunny is the unwilling witness to Qiang and Lina’s rekindled friendship (and undeniable sexual chemistry), which makes for some hilariously awkward moments.

I also love her own subplot, about a bracelet of Lina’s that had gone missing and a servant, Sunny’s best friend in the city, was accused of the crime. We see how the Zhens could get a servant fired for a fairly minor crime without thinking about the family that servant has to support, and like Sunny, we can understand how a servant could be driven to steal more out of long-held resentment towards the elite than need for money. And on the other side, we are also made to understand how a bracelet that Sunny and the other servants think doesn’t look valuable enough for a fuss actually has strong sentimental value for Lina, and why its loss really hurts her.

The book is compelling and well-written. I do wish there had been more closure with the ending. I’m also not sure how I feel about the truth behind something that happened twenty years ago — on one hand, it makes a lot of sense, on the other it also feels somewhat a copout for the emotional drama. Still, it’s a good book, and I like that it highlights the experience of coming back home only to realize it no longer feels like the home you remember.