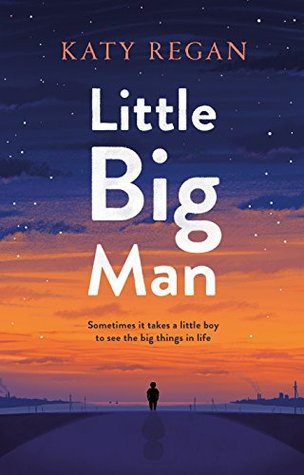 Little Big Man is such a sweet book about family and all the messiness that happens in family relationships. Ten year old Zac has never met his father, who allegedly abandoned the family before he was born. When Zac’s mom accidentally admits that his dad was the only man she’s ever loved, Zac decides to track his dad down and bring him home before his eleventh birthday. The thing is, the reason his dad left in the first place is complicated, and Zac’s mom and grandparents all have to confront their culpability in what happened.

Zac isn’t the only hero in this novel. I love that the book also takes on the perspectives of Zac’s mother Juliet and Zac’s grandfather Mick, because they all put together the pieces of a very complex puzzle of what had happened over a decade ago. I love that Juliet is dealing with issues of her own, having raised Zac as a single parent and being afraid she’s not quite providing him what he needs. I also like that Mick is dealing with his own history of alcoholism and how that informed his determination to be a great grandfather to Zac.

Zac’s search for his dad is the main plot of this book, but more compelling to me was the subplot about his weight and his getting bullied at school. I found Juliet’s response — her guilt over her limitations as a parent and her defensiveness over Zac’s weight and her own — very relatable, and I love that she always puts his welfare above her own. For example, even though she doesn’t like exercising and she really doesn’t like talking about his father, she offers to go jogging with him and to tell him something new about his dad with each kilometre they run.

Even more importantly, I love that weight loss isn’t shown as the solution to Zac and Juliet’s problems. Zac does lose some weight, and Juliet survives the jogging just fine, but neither ends up actually thin, neither ends up actually obsessing over their weight, and their jogging ends up being more about Zac wanting to learn about his dad rather than about losing weight or becoming more physically fit. I also absolutely love the side character of Jason, who used to date Juliet until Juliet broke it off with him, but who continues to be friendly with Zac. Jason is a fitness trainer, and unlike the stereotypical gym dudebro, he genuinely thinks Juliet is beautiful just the way she is, and he seems very empathetic to Zac’s desire to find his father. I was full-on shipping him and Juliet to end up together, but I also appreciated their deep friendship, and how Jason was there for Juliet and Zac even without the possibility of romance.

I also love Zac’s friendship with Teagan, and how supportive they are of each other. I love how Teagan signs on for Zac’s quest to find his dad, no questions asked, even though she’s dealing with her own pain around not having a dad. And I love how well their personalities complement each other, such that each falls easily into an assigned role when they go out to investigate Zac’s dad’s whereabouts. They’re just fantastic as best friends, and their adventures add a fun caper-like feel to the heavier issues within the story.

Little Big Man is a beautiful and poignant story that goes much deeper than the initial quest that sets the events of the story off. I loved the characters, and I loved their stories.

Thank you to Publishers Group Canada for a copy of this book in exchange for an honest review.