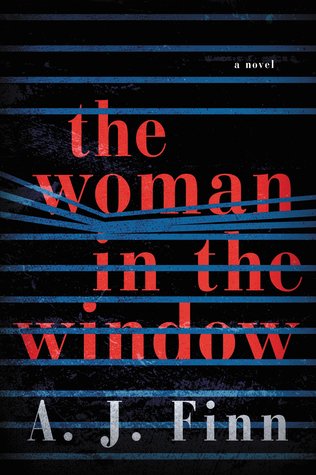 Anna Fox is an agoraphobic recluse in New York, who spends her days watching old movies and spying on her neighbours. One day, she witnesses a murder through her neighbour’s window, but when she reports the crime, she learns that not only is the victim alive, but the woman she thought was her neighbour seems to never have existed at all.

AJ Finn’s Woman in the Window is a well-written psychological thriller in the vein of Rear Window and Girl on the Train. I had the opportunity to meet the author in the Harper Collins offices a few weeks ago, and I enjoyed hearing about how his own experiences with mental health informed the writing of this book. I like that the book updates the Rear Window trope to an agoraphobic heroine — it’s a condition that I don’t often see in novels. Finn does a good job in depicting how terrifying the outside world is for Anna, as well as how much the Internet can help in forming a social circle online.

The reason behind Anna’s agoraphobia informs much of Anna’s psychological journey, and it was sad to see her struggle in coming to terms with what happened. The reality behind the event is fairly easy enough to guess early on, which detracts from the impact of the big reveal midway through, but this knowledge also enhances some of the earlier scenes with emotional heft.

The story started off a bit slow for me. There were also a lot of old movie references that I think will appeal to film buffs and possibly even foreshadow events in the novel, and I also appreciate how they helped form a complete picture of Anna’s isolation such that the old movies are the highlights of her day. But to me, they just slowed the story down.

The second half picks up the pace significantly, and to my mind, is worth the wait. The big reveal about the villain is unexpected and chilling, and goes to show how vulnerable loneliness can make a person.

Thank you to Harper Collins Canada for a copy of this book and a chance to meet the author.