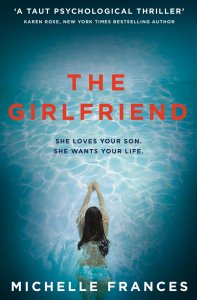 Laura has a successful career and a solid, if not particularly strong, marriage, but the best thing in her life is the close relationship she has with her son Daniel, now twenty-three years old and studying to be a doctor. When he falls in love with Cherry, a real estate agent from the wrong side of the tracks, Laura thinks that Cherry is only after Daniel’s money. Worse, Laura worries that Cherry will take Daniel away from her. On the other hand, Cherry is determined to rise to a higher social strata, but soon finds herself developing genuine feelings for Daniel, and beginning to resent his mother’s constant presence in their lives.

The Girlfriend starts off as a taut domestic drama, an emotional tug-of-war that may likely feel familiar to parents whose children are about to leave the nest, or conversely, to people whose romantic partners have a possibly unhealthy attachment to their parents. While I admired the way Michelle Frances infuses a fairly everyday situation with a thriller-ish feel, the book started off slow for me and I struggled to stay interested.

About half-way through, one of the women tells the other an unforgiveable lie, and this sets off a series of events that ramp up the action considerably. The tension simmering just beneath the surface through the first half finally explodes to the surface, and Cherry and Laura go into full-on attack mode and scheme to destroy each other’s lives and win Daniel once and for all. The second half of the book bumped up my impression of the book overall; even though it felt more like a traditional thriller while the first half felt more unusual, I really enjoyed the twists and turns in the second half. Both women come off disturbed (Cherry’s borderline sociopathy and general coldness towards her mother, Laura’s smothering love for her son), but also somewhat tragic in their respective circumstances (Cherry’s poverty, Laura’s unhappy marriage), and it all comes to a head in an exciting climactic scene.