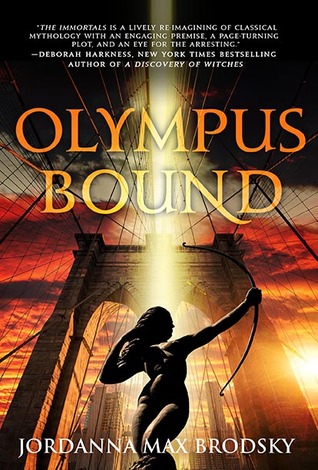 I absolutely loved The Immortals and Winter of the Gods, so I was eager to see the next instalment in the story of Selene DiSilva, the Greek goddess Artemis living in present-day New York. Unfortunately, I found myself bored with Olympus Bound. I gave it a few tries, because the first two books were so great, but I eventually gave up and marked it as DNF at 31%.

The story has a compelling premise: the culmination of Selene’s battle against mysterious forces with an apparent vendetta against the Olympian gods and goddesses. In Olympus Bound, Selene is after her grandfather Saturn, a titan deposed from power by his son / Selene’s father Zeus when Zeus took over Olympus. She suspects that Saturn is behind the recent attacks on the Olympian gods and goddesses and that he holds Zeus captive for a ritual sacrifice that will increase his power tremendously. He poses a major threat because, while the Olympian gods and goddesses have been steadily losing their power in the last few centuries, Saturn has been manipulating belief systems like Christianity to ensure his own power remains strong. In the meantime, classics professor Theo is mourning what he and while his friends try to help him move on, he is obsessed with plotting how to bring Selene back from the underworld.

It’s the perfect set up for an epic, emotional battle, but the execution fell flat. Grief-stricken Theo is just mopey, and the plan he comes up with to save Selene is certainly audacious, but he just came off kinda pathetic. I sympathize with his grief, but I also just wanted to join his friends in telling him to move on already. There was a colleague who stayed with him because she had a crush on him and was hoping to catch him on the rebound — I found her a compelling character and wanted her to find someone who would actually love her back.

Selene’s quest to find Saturn and save Zeus should have been epic, but instead felt mechanical. I like seeing more of Flint’s character and I thought Juno seemed interesting, but Selene fell flat. She was such a compelling character in the first book, and I think her relationship with Apollo made her more nuanced in the second book, but in this book, despite the emotions over missing Theo, worrying over her father, and wanting revenge on Saturn, she feels like little more than a device to advance the plot.

As I said, I gave up on this book at the 31% mark. Winter of the Gods started off somewhat slow as well, so it’s possible Olympus Bound would’ve gotten better if I’d stuck with it. I just no longer care enough to find out.

Thank you to Hachette Book Group Canada for an egalley of this book in exchange for an honest review.