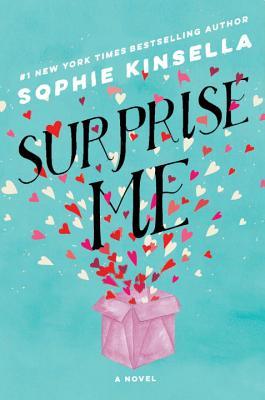 Surprise Me is such a funny, sweet and romantic novel about keeping the romance alive after marriage and sustaining the happily ever after for the rest of a potentially long life. When a doctor tells Dan and Sylvie they could end up living another 68 years, they realize that’s 68 more years of marriage, which in turn sparks an existential crisis that starts of hilariously blooperific and turns out to become the sweetest thing ever.

Sylvie is hilarious is signature Sophie Kinsella style — similar to Becky Bloomwood, she approaches life with balls to the wall over the top emotion, but, also like Becky, with a sense of innocence that makes it all understandable. Unlike Becky, Sylvie has had more life experience and so has a bit of a more measured look at things. I love that I feel like I’ve grown with Kinsella’s books — while Becky’s take-no-prisoners adventures were an utter delight to read in my teens and 20s, I feel like I relate more now with Sylvie’s more career-oriented and domestic-life long-term concerns.

And Dan — OMG, I may be in love with him myself. He’s the sweetest man and Sylvie is lucky to have him. I love his awkward attempts at romantic surprises (his idea of a sexy surprise was definitely more surprise than sexy!), and I especially love all the actual surprises Sylvie learns about him. He has a quiet and steady kindness that pales in comparison to Sylvie’s own strong personality and rosy memories of her rich and powerful father, but that turns out to be a real and lasting treasure in the end.

I also love the subplot about Willoughby House, a heritage site where Sylvie works as a development officer. I love how its traditions and quirks make it a safe and comfortable place for Sylvie, but with the entrance of the kind elderly owner’s nephew, even this safe haven may have to face the harsh reality of impending change.

Finally, I like how Kinsella showed us Sylvie’s utter devotion to her father and her grief over his untimely death, but gave just enough hints about his imperfections. I’ve had an uncomfortable feeling about him and the seemingly perfect veneer of his legacy from the start, and I like how Kinsella gradually unfolds the story to show that while he may have treated his daughter as his princess, not everyone has had such a rosy experience of him.