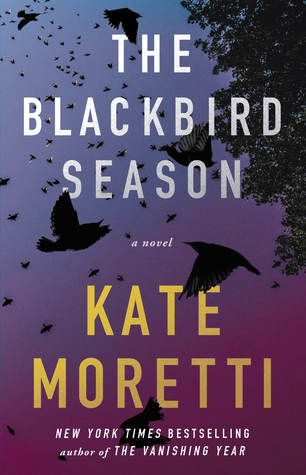 A flock of starlings falling from the sky kicks off this novel about a juicy scandal in a small Pennsylvania town. Beloved math teacher Nate Winters is accused of raping a troubled student, Lucia Hamm. An unpopular goth and perceived witch, Lucia disappears shortly after someone sees Nate with her, and the investigation uncovers uncomfortable truths about the town’s residents. Lucia’s prickliness may hint at bullying and abuse on multiple fronts. Nate’s friend and fellow teacher, Bridget Harris, becomes his sole supporter, using Lucia’s class journal and tracking down her friends and family to prove Nate’s innocence.

I didn’t quite find it a novel of “nerve-shattering suspense” that the blurb promised, nor did I think that the twists and turns were all that surprising, but I don’t think that’s a bad thing. Rather, I think Moretti has crafted a really good character study that delves deep into the psyches of its characters. The ultimate twist was a big reveal not because it was difficult to identify the villain, but because it cast a harsh light on some troubling situations that are likely happening in real world high schools.

Many of us can probably remember having a teacher like Nate. He’s like Robin Williams’ character in Dead Poets Society — charismatic, passionate, and with a finger firmly on the pulse of his teenage students. Part of me finds his interest in his students’ lives a bit creepy, e.g. setting up social media accounts just so he can follow all of his students on social media and keep tabs on their lives. But I can also imagine myself back in high school, and how flattering I may have found that kind of attention from a handsome, young male teacher. So I can see why Lucia would have been drawn to him, and why Bridget would have carried a secret torch for him for so long. He’s probably the most thinly drawn of the characters, and possibly deliberately so. We’re not quite sure what lies beyond his charisma and overall nice-ness, but there is no undercurrent of darkness that makes us believe he could commit the crimes of which he’s charged. He probably becomes most interesting when stress gradually peels off his veneer of perfection, and reveals his resentment at the lack of support from his wife and the town in general and at his lack of agency in determining his son’s care.

I can also understand the frustration of his wife Alecia, who I found the most compelling and nuanced character in this book. Alecia’s a Type A personality, who takes the lead on caring for their autistic son. Unlike Nate, who advocates to let their son simply be himself, Alecia takes him to one therapy session after another, and refuses to heed the therapist’s warning that her son may not be ready for kindergarten yet. When a reporter confronts her about Nate’s affair with a student, her carefully constructed world crumbles, and her fear over the outcome is palpable. While Bridgette was clearly the heroine of this novel, genuinely supportive of Nate and caring about Lucia’s fate, I thought Alecia was the most relatable character.

Despite being the linchpin on which the entire plot turns, Lucia probably was the least interesting of the characters for me. Rebellious goth, emo girl fascinated by death and poetry and blackbirds, a bully who may also be being bullied herself… we’ve seen this character before and multiple times. While she does go through some horrible experiences in this book, she’s still ends up being pretty flat as a character, and I cared about what happened to her only in a general way I would care about any teenage girl who goes through what she did.

Overall, Blackbird Season is a pretty good read, and a glimpse into how a small town deals with a scandal.

Thank you to Simon and Schuster Canada for an advance reading copy in exchange for an honest review.