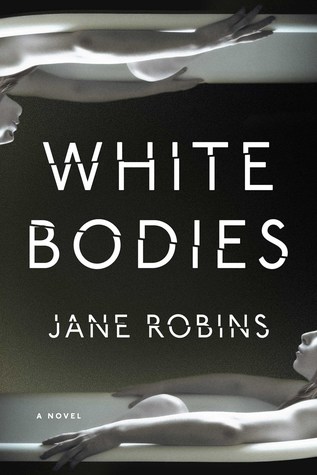 White Bodies is a chilling psychological thriller that makes you think it’s going in a certain direction but manages to pull the rug out from under you at the end. The big reveal comes as a surprise, though when it happens you wonder why you didn’t see it coming. Robins does a great job in creating a troubling undercurrent of unease throughout the story, so that even when you think you have a handle on what’s happening, there’s a part of you twigging that something’s not quite right.

I’ve long been a sucker for stories about twins, and this book plays around with the tradition of the good twin/bad twin dichotomy. Tilda is the Jessica Wakefield of the pair — beautiful, glamorous, and irresistibly attracted to danger. Callie is mousier than Elizabeth Wakefield ever was; shy and unassuming, she is obsessed with her sister’s glamour. Her obsession goes beyond a Single White Female desire to be her twin, however, and is almost a desire to consume her twin — in a rather disturbing reveal, we learn that Callie ate her sister’s baby teeth, which is just really gross.

I love how Robins depicts the complexity of their relationship. There’s something definitely off about Callie’s feelings for her sister, so when Callie expresses concern that Tilda’s boyfriend Felix is abusive, it’s hard to tell how much of it is genuine love and how much is jealousy or something more sinister. We experience the story through Callie’s perspective, and the unreliability of her mental state keeps us off-balance throughout.

Tilda as well is a fascinating character. She withdraws from her twin, purportedly because Callie and Felix don’t get along, but it sometimes feels like her desire for distance is rooted in something deeper than that, and I wondered how much she intuited of Callie’s feelings. We mostly see her as Callie does — a victim of domestic violence who needs to be rescued — but again, Robins does a great job in hinting at what lies beyond Callie’s notice.

Felix’s death on the very first page plunges the reader immediately into a traditional murder mystery. Callie’s fear of police knocking on her door on page 4 makes us think we know what this mystery will be about. But as we read on, Robins uncovers layer after layer from these characters, and it’s a taut, compelling ride to the finish.

Thank you to Simon and Schuster Canada for an advanced reading copy in exchange for an honest review.