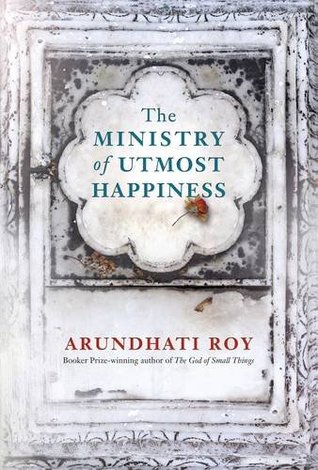 It seems almost blasphemous to admit I didn’t like Arundhati Roy’s The Ministry of Utmost Happiness. I absolutely adored her earlier novel The God of Small Things when I read it for university years ago, and I was looking forward to reading the story that compelled her return to fiction after twenty years.

In many ways, Ministry of Utmost Happiness feels like an important novel — it spans multiple generations and touches on some significant points of India’s past. There are parts where freedom fighters are imprisoned by a corrupt government and must negotiate their way back to freedom, and I found these chapters particularly strong. These chapters reminded me a bit of Martial Law novels from the Philippines, and I can only imagine how much more impactful they would have been on me if I were more familiar with India’s history. This also happens to be one of several subplots in the novel, all of which depict individual lives within the context of a broader socio-cultural milieu.

Roy is a tremendously talented writer and her language throughout the novel is simply beautiful. Even at sections where my attention flagged, I had to appreciate the cadence of her prose.

Despite all that, I found the book a struggle to read. The review on the blog Sukasa Reads notes that “the onus is on the reader to care but it’s akin to wading through the flora and fauna of a wild jungle without a machete,” and I think that encapsulates much of the problem I had in reading this book. It just felt heavy throughout, likely deliberately so given the significance of the subjects Roy covers, and to Roy’s credit, the novel feels important without feeling self-important. But it is a slog to get through.

There’s a quote on the back cover of the book:

How to tell a shattered story?

By slowly becoming everybody.

By slowly becoming everything.

That’s what the story feels like. The interactions and scenes with the characters all feel momentous, and likely other readers may care enough to pick through the threads and find a wealth of insight beyond the surface. I tried, but there was just so much going on and so many disparate pieces of plot that didn’t quite seem to connect that it just ended up not feeling worth the effort.

There are some lovely moments throughout. I love the character of Saddam, how he was blinded by the glare of the sun’s reflection all because his boss made him work long hours and wouldn’t allow him to wear sunglasses at work nor look away. I love that he chose his name because he admired and was inspired by Saddam Hussein’s dignified pride at his own execution without knowing, or really caring much about, the broader circumstances that led to this execution. I love the activism of Tilo and how her romantic history influenced her political life. I liked the scene of groups of protestors convening at a single plaza, and the idea of someone being hired to ensure people pay the fee to use the single toilet.

I’m glad I finished the book because my favourite parts involving Tilo’s story are near the end, but it was a struggle to get through. There may be readers who’ll find themselves caught up in the language, and able to parse through the various threads to find the brilliance of what Roy is trying to say. Then there are readers like me for whom it just ends up not worth the effort.