The experience of reading a play can never be as amazing as seeing it performed live, but some plays come pretty close. The best plays to read are the ones where things are so vividly described you can almost imagine watching it performed, and that imagining only makes you wish all the more you can experience it in person. Cliff Cardinal’s Huff & Stitch and Kat Sandler’s Punch Up are two such books, where so much of the magic is in the rhythm of the language, and I’d love to see people bring it to life on stage.

Huff is about Wind and his two brothers Huff and Charles coping with their mother’s suicide, their father’s abuse and the machinations of Trickster. It’s an intense, visceral play that begins with Wind on stage with a plastic bag over his head, duct-taped to his throat, his hands cuffed behind his back, and the pace never lets up from there. Audience members are made complicit as well, as Wind talks about suicide then walks up to an audience member to request they remove the cuffs and hold on to the plastic bag. “Don’t give it back no matter what I say,” he says. “I need you.”

All this within the first few minutes, and as the play goes on, we learn about what has brought Wind to that point. It’s a tragic, raw story about family and growing up in the residential school system, and incredibly powerful on the page. The actor playing Wind also plays the other parts — his brothers, his father, Trickster — and the incredible skill to pull that off unfortunately cannot be captured in the script, but must be amazing to see in person.

Stitch is funny and sad at the same time; Kylie’s yeast infection is personified and acts as the voice of her subconscious, which is just hilariously tragic and so fitting yet so wrong. The pace feels frenetic, and the lines sometimes blurred where one experience ends and another begins. For example, the part where Kylie performs a rape scene for her job is structured so that it’s unclear at first if the assault is real or staged, which just highlights all the sexism, exploitation and general messed-up-ness Kylie faces in her life.

Punch Up by Kat Sandler 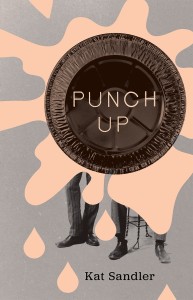 Punch Up is hilarious! In a nutshell, from the back cover:

The Most Pathetic Guy Ever kidnaps the Funniest Man Alive to make the Saddest Girl in the World laugh.

Duncan falls in love with Brenda, a woman he sees about to kill herself. He makes a deal with her — if he can get her to laugh at dinner that night, she promises not to follow through, but if he can’t make her laugh, he’ll kill her himself. She agrees, and since he needs help, Duncan then kidnaps one of his favourite comedians Pat, chains him to a desk with a typewriter, and demands that Pat help him come up with the perfect routine. The irony is that Duncan is unintentionally funny — he’s a bread tester at a factory whose job is to sample every 41st loaf to test its density — but he’s horribly unfunny when he actually makes an effort.

The introductory stage directions instruct performers to “punch up” the jokes if they can come up with better ones, and with regard to pace is the laconic directive: “Pick it up.” Even on the page, it reads like a stand up routine, with brisk patter and overlapping dialogue punctuated by strategic little moments of silence where I can just imagine one of the actors pulling a Jim Halpert look.

I was in hysterics just reading the play, it’s SO FUNNY! I’d love to see it in person, and see actors bring the comedy to life in a way I may not be able to imagine. Someone please stage this play soon, and in the meantime, even just the book version is an awesome comedy fix.

Thank you to Playwrights Canada Press for copies of these books in exchange for honest reviews.

1 thought on “Play Reviews | Huff & Stitch and Punch Up”