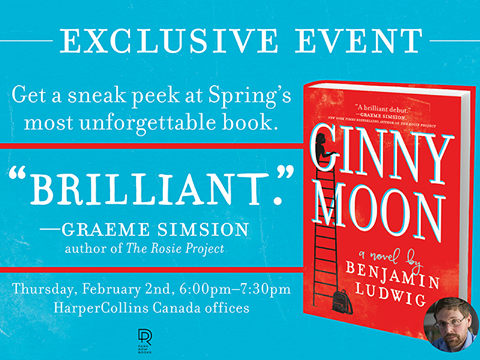 Shout-out to fellow blogger Lynne at Words of Mystery who gave me a heads up about this event on the Harper Collins Canada social media accounts, and to fellow blogger Shilpa at Sukasa Reads who came with me to the event. The Original Ginny Moon by Benjamin Ludwig caught my eye for two reasons: the protagonist is autistic, and the author drew on some aspects of lived experience, having himself adopted a teenage girl with autism. In fact, the story was in part inspired by conversations he had with other parents at Special Olympics basketball practices.

Ginny Moon is about a 14 year old autistic girl who is adopted and begins plotting her own kidnapping by her abusive birth mother. In the Q&A during the event, Benjamin Ludwig mentions that she worries about something she left behind, and that the adults around her don’t necessarily realize is significant. So there’s a bit of mystery and a coming of age family story.

Some of the things Benjamin said in the Q&A really stood out to me. First, in response to a question about why he wrote an autistic narrator, he said he’s a language nerd and that he’s fascinated by the way people with autism communicate. While there are many differences in persons with autism across the spectrum, he says a common thread is that they tend to express ideas in a different way from neurotypical people (persons without autism). In a way, he says, Ginny Moon is “a narrative impossibility,” because it’s told in the voice of someone with autism but written with a neurotypical audience in mind. He also tried to portray the frustration someone with autism may feel at expressing their ideas clearly yet not being understood by a neurotypical person.

He also spoke about our society’s privileging of strong personalities, and how we train everyone to be leaders in the traditional, extroverted, sense of the word. He pointed out that not everyone can be leaders, and that some people may prefer to stay in the background, and that’s okay. More importantly, their voices are important too. He said we can’t all be wolves, some of us are sheep, and there’s nothing wrong with that. Ginny Moon is one such person, who prefers to stay out of the spotlight, and he wanted to present a character who’s strong without being the one everyone notices. He said, “I want to give dignity, respect, acknowledgement to people who don’t have a voice.” And I think that’s awesome.

This is somewhat reflected as well when I asked him during the audience Q&A who he would like to play Ginny Moon if they made a movie. Much was said during the official Q&A about how unique Ginny’s voice was, and I was curious who he thought could give justice to this voice. He said he’d love it if they would cast a complete unknown, who isn’t a Hollywood star yet but could be big someday. Someone else followed up with a question about if, given the current conversations around representation, he would demand they cast someone with autism in the role, and he said he’s like for that as well, as long as the actress wasn’t a star yet.

A beautiful package from the event! 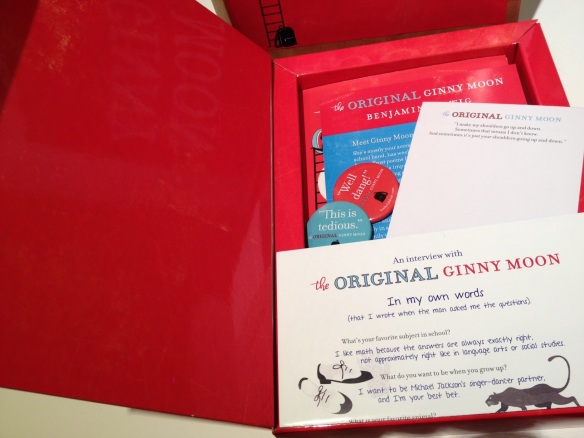 The book came in a beautiful keepsake box that I plan to fill with pretty trinkets once the book itself is on my shelf.

Benjamin and Harper Collins Canada staff were all very careful not to provide any spoilers about the book itself, but based on the author’s responses alone, I’m already really excited to begin reading. The event swag was also gorgeous — the advance reading copy (ARC) had flaps and deckled edges, and even looked like a hardcover from afar! Even better, the ARC came in a beautiful keepsake box, complete with magnetic strip to snap the lid shut and ribbon to lift the book.

The Original Ginny Moon will be published in May 2017, so keep an eye out for it in stores!

Thank you to Harper Collins Canada for organizing this event.