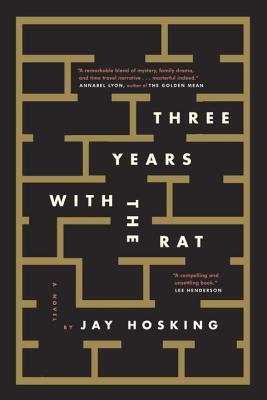 In Three Years with the Rat, an unnamed narrator moves into Toronto to meet up with his older sister Grace and her boyfriend John. Both Grace and John are scientists, and when the book begins, it’s been about a year since John disappeared and a bit longer than that since Grace disappeared. The narrator goes into their apartment to take their stuff and finds a mysterious, mirror-filled box, a lab rat named Buddy, and John’s notebook written in code. He sets off to investigate their disappearances and save his sister and friend, and what follows is a pretty trippy story about science and philosophy and time travel / alternate dimensions/realities. I don’t completely understand what happened, and I suspect that’s the author’s intention. The narrator’s girlfriend Nicole quotes Albert Camus, “I realize that if through science I can seize phenomena and enumerate them, I cannot, for all that, apprehend the world,” and that seems to be the point of this story.

Structured by the months of each particular year, the story flips us between the narrator’s early days in Toronto when he first learns of his sister’s work to Grace’s seemingly sudden decline into bouts of irrational anger to John’s own mood swings that appear to mirror Grace’s and finally to the present day when the narrator tries to piece it all together and must decide how far he is willing to go to save them. The Camus quote is a warning about the limitations of human intelligence, and in an early chapter, we see just how grand in scale Grace’s work aspires to be.

At one point, the narrator jokingly asks Grace to make the dumbed-down version of her work even dumber, and I admit I wanted to ask the same. So, per my understanding of the dumber version of the dumbed-down version of Grace’s work: she is interested in isolating pure subjectivity. Things and places around us are objective realities, in that an apple is red no matter who’s looking at it. But even though there are objective measures of time, our experience of time is very subjective, as it seems to speed up or slow down in relation to our needs. So how can we distil whatever it is that makes time different from everything else?

It’s a helluva project, and I feel like there are all these philosophical and metaphorical threads that Hoskings invites us to tease out and that I don’t quite grasp, but it also gives you an idea of how someone can lose themselves so thoroughly into that question that they, literally, disappear.Reading this is an unsettling experience, and deliberately so, I think. What starts out as a fairly straightforward missing person mystery somehow turns into a disquieting tale of things that aren’t quite right turns into a bit of a fantasy with a philosophical bent.

The end of the book left me with some lingering questions, and it’ll be easy to slip into an endless loop of questioning, possibly about things that are completely insignificant. (e.g. Does it mean anything that John’s lab passcode is the same as the ID badge number of the officer investigating Grace’s disappearance?) However, unlike Grace whose never ending thirst for knowledge consumes her, I think I’ll remain comfortable in the limitations of my own knowledge, and just remain glad that I read and enjoyed this twisty trippy tale.

As an aside, the author of this book is a neuroscientist who researches decision-making and the human brain, which I think is a pretty nerdy-awesome job for an author to have.

3 thoughts on “Review | Three Years with the Rat, Jay Hosking”