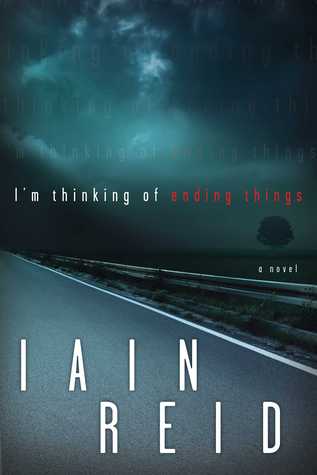 I absolutely loved Iain Reid’s memoir The Truth About Luck, about a road trip with his grandmother, and I was really excited to read his debut novel I’m Thinking of Ending Things. Reid is a wonderfully talented writer, and the way he subtly builds up the suspense and dread throughout this book is masterful.

A young woman goes on a road trip with her boyfriend Jake– their first trip together. They’re on their way to meet his parents, and she is thinking of ending the relationship. Talk about awkward. The tension increases with the revelation that the woman has been receiving calls from an anonymous man, sometimes as many as twelve calls in one night, and as if that wasn’t creepy enough, the calls all appear to be coming from her number. The caller appears interested only in leaving her messages; whenever she picks up the phone, the man hangs up.

“There’s only one question to resolve,” the caller says in her voicemail. “I’m scared. I feel a little crazy. I’m not lucid. The assumptions are right. I can feel my fear growing. Now is the time for the answer. Just one question. One question to answer.”

What that one question is, the caller never says, and that mystery just about drove me mad while I was reading. Often, I wanted to scream at the mysterious caller myself, just ask the f*cking question already! The caller also leaves a second voicemail, one that reveals he knows her inside and out, and ends with the chilling proof: “You shouldn’t bite your nails.”

Interspersed with this woman’s story are chapters of dialogue between unnamed characters, discussing an unnamed “horrible,” “scary” and “disturbing” act committed by a man who was “standoffish” and “kept to himself.” Sadly, many current events can help us imagine what this “horrible” act of violence could have been, and as we read on, the mystery deepens as to how Jake and his girlfriend are about to become involved in whatever had happened.

After the initial creep factor of the mysterious caller, and the introduction of the two main sources of tension (the mysterious “horrible” incident and the girlfriend’s intention to leave Jake who doesn’t seem like the type to handle it well), the story slows down a lot. I was bored for a bit because nothing seemed to be happening, and it’s only later that I appreciated all the little bits and pieces that Reid has so carefully set up.

The story picks up again once Jake and his girlfriend arrive at Jake’s parents’ farmhouse. There’s a vague feeling of rising disquiet, of encroaching dread, in those scenes, and Reid’s mastery lies in the fact that I could never quite put my finger on why. I just know that something feels off, that Jake’s parents aren’t acting quite right, and that something bad is going to happen, though I had no idea what. The story gets progressively better (read: odder) from there, and with the big reveal, all the puzzle pieces fall into place.

I closed the book and sat for a while, unable to move, just absorbing what I’d just read. It was a slow burn throughout and ended with a wallop, and I just felt like applauding the author for what he’d accomplished.

I’m Thinking of Ending Things isn’t my favourite Iain Reid book — nothing, but nothing and no one can compare to his absolutely loveable grandmother and the story of their road trip. As well, while I imagine there’s a pleasure in picking up the clues in the details Reid has so carefully scattered throughout, I’m not sure how well this book will hold up in re-reads, now that I know how it turns out. But still, bravo Mr. Reid. Well done.