Glory Over Everything is a highly readable story about James Burton, who has been passing as a wealthy white aristrocrat in Philadelphia, and who must now risk the life he’s built to return to the South and rescue a young servant boy named Pan. The action builds up slowly — Grissom spends the first half of the book building up James’ story, and it isn’t until the second half that James finally sets off to rescue Pan and the action picks up.

Still, James’ back story is highly fascinating. Having grown up white, he learns of his mixed race heritage only as a young teen, then almost immediately faces a potential life of slavery. Grissom barely glosses over this bit of his life here, and I can only imagine much of it is already discussed in the earlier book The Kitchen House, which I haven’t read yet. Instead, Grissom focuses on his life after escaping his childhood home, where he is rescued by a black free man Henry, who helps him find a job, a home and a future as a white man. James achieves wealth and social status, yet his hold over this life is clearly tenuous; even the loving, kindhearted woman who adopts him wouldn’t be able to accept him if she learned the truth. When James falls in love with a woman named Caroline, the relationship results in a pregnancy that jeopardizes the life he’s built, and he is torn between fear of telling her the truth and resignation that the truth may come out no matter what.

James’ story is certainly fascinating, yet even more compelling is the second half, where James finally goes South to rescue Pan. The reason behind Pan’s needing rescue in the first place struck me as rather silly, and to be honest, annoying, but admittedly in line with Pan’s character and his desire to impress James.

The truth stand-outs for me, however, are the other characters: Pan’s father Henry, overcoming his fear of being captured and sold back into slavery in order to save his son; and Sukey, a nurse and slave in the same household as the one Pan is sold into, who helps transport other slaves through the Underground Railroad, and who makes it her mission to rescue Pan. Both their stories are tragic and beautifully told, and I would personally have liked to hear more of them.

Glory Over Everything is thought-provoking, moving and thrilling all at various points in the story. I cheered for James to rescue Pan and get back home safely, just as I couldn’t forget Henry, Sukey and all other characters who faced even greater danger than James did. I love the idea of trying to escape your past and your heritage, especially with the realization that you can never truly do so. The novel ends with some tough decisions that James has to make, which will impact not just the future trajectory of his own life, but also the lives of people around him. His decision has some potentially interesting repercussions, and I wonder if Grissom plans to continue the series.

Thanks to Simon and Schuster Canada for the invitation to join the blog tour for this book! Check out the rest of the stops below: 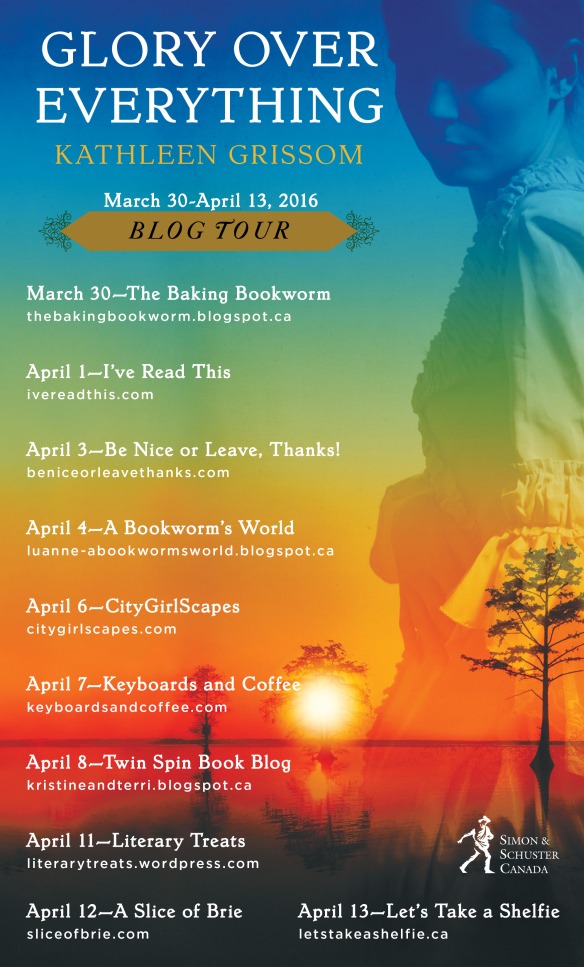 Thanks to Simon and Schuster Canada for an advance reading copy of this book in exchange for an honest review.

1 thought on “Review | Glory Over Everything, Kathleen Grissom”