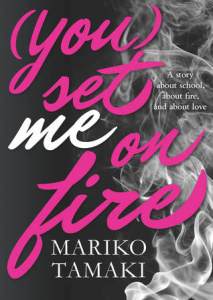 Remember being seventeen and in love with someone you knew was bad for you? In (You) Set Me on Fire, when seventeen year old Allison Lee enters college, she has been in love once (disastrously), burned twice (literally), and appears headed for yet another romantic disaster. She finds herself drawn to beautiful classmate Shar, who soon becomes the centre of Allison’s universe.

As an adult, I immediately found Shar pretentious (the “too cool” outsider who looks down upon other students), and later emotionally manipulative and utterly messed up. I honestly didn’t understand the appeal, when there were perfectly nice classmates like former cheerleader Carly who were inviting Allison to join them in various activities. However, thinking back to myself as a teenager, I have to admit Allison’s decisions may not have been so far-fetched as I’d like to think.

Tamaki is fantastic at capturing the teenage voice. Allison sounds like a teenager without the usual Clueless/Valley girl trappings of authors trying too hard to sound young. Allison sounds smart, and more than that, funny. Here is a story about a girl heading into a toxic relationship, who’s had some problems with fire, and who feels she doesn’t quite fit in with others her age — and it’s funny! This is not to diminish everything Allison is going through — at times, her encounters with Shar and her flashbacks to her previous romantic disaster (high school classmate Anne), are almost painful to read because the emotions are so raw. But the narrative as a whole is laced with sardonic humour, and that, combined with an ever-present undercurrent of raw vulnerability, makes Allison’s story so powerful.

Take a look at this passage for example, shortly after Allison enters college and realizes her classmates there know nothing about her or her past:

So for a brief moment in time I was in the freshman threshold of opportunity: the people around me knew only what I’d told them about myself, Nothing more. They’d had almost no time to formulate an opinion for themselves and no one was around to inform them of anything different from what I said or what I did. If I smiled and giggled at their jokes, I could be a happy-go-lucky person. If I slept with the first boy I laid eyes on, I could be a slut. I could even get in a fight and be a loose cannon or a bully.

I remember that moment of opportunity, that moment when I could completely reinvent myself, redefine who I’ve become. It happens every now and then, with a new school or a new job or even a new city. It’s exhilarating, and a great part of figuring out who you want to become. That moment of hope, so early in Allison’s story, is particularly poignant as we read on, and realize she’s falling into an old pattern, and that this too is a familiar experience for anyone trying to reinvent themselves.

The brilliance of Tamaki’s writing is evident even in the title, which is possibly one of my favourite book titles ever. The parenthesis create a dual layer of meaning, with both layers somewhat at odds with each other. The declarative, almost accusatory romantic statement “You set me on fire” is in tension with the directive “Set me on fire,” which could be either a demand or a plea. This subtlety is carried through with her use of fire as a metaphor, a somewhat overused symbol for passion, yet in Tamaki’s hands it feels fresh. From Allison’s scar to escalating incidents with fire in the story to the striking allusions to history and mythology, fire is woven through the narrative in a masterful way that is overt without, to my mind, ever being over the top.

I made a pledge in 2015 to read books by Asian American women writers, based on a list compiled by Celeste Ng. Mariko Tamaki isn’t on the list, but this book happened to catch my eye in a shop, and I’m glad it did. If you happen to be joining me on this pledge, I highly recommend you add this to your list as well.