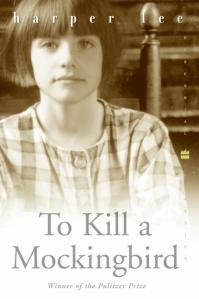 Last weekend, I re-read Harper Lee’s To Kill a Mockingbird for the first time in years. It’s undeniably one of the most significant books published in the 20th century, and certainly a personal fave for myself and the absolute favourite book of all time for my younger sister. So when I re-read it last weekend, I expected to feel nostalgic, to be brought back to the person I was when I first encountered this book, and to lose myself once more in a world that had made such an impact on me as a child.

To my surprise and delight, it wasn’t nostalgia that characterized my re-read, but rather a sense that I was reading the book for the first time. So many things that I don’t remember being affected by when I first read the book struck me strongly in this re-read. Mockingbird is a seminal classic in literature about race relations, yet I realized only now how much casual race distinction exists even in the progressive characters. For example, when Scout and Jem enter Calpurnia’s church, or sit with the black townspeople during the trial, why are they automatically given front row seats? In the case of the trial, a few African Americans gave up their seats in the front row. On one hand, it is a lovely gesture of hospitality and welcome, a sense that Scout and Jem are guests to the community and therefore accorded good seats. On the other hand, it bothers me that even within the black community, the white characters are given pre-eminence, even with something as simple as a place to sit.

I also found myself noticing the gender disparity highlighted by the trial. Mayella Ewell, the woman who falsely accuses Tom Robinson of rape, is far from innocent in the sense that she wrongfully convicts a man who by virtue of his skin colour is even more powerless than she. Yet in a sense, she is also a victim, subject to the whims of her father and bound by the terms of female propriety dictated by her society. As a woman, she is expected to maintain a certain level of purity, and it is because her fulfilling her sexual desire with a black man violates that code of conduct that her father beats her up.

The trial is not just a case of the strong preying on the weak (white characters attacking black ones) as the weak (a woman) forced to prey on the weaker (a black man). Or to be exact, the strong (Mayella’s father) exploiting the weak to prey on the weaker. In a passage I found profoundly disturbing, Jem gleefully outlines the ridiculously high standard of proof required for a woman to convict a man of rape — no means no, but the “no” must be accompanied by violent protest. Within the context of this story, Jem’s happiness over this sets the stage for his eventual loss of innocence — even a man as obviously innocent as Tom Robinson can be convicted simply because of his skin colour. But the whole idea that, due to notions of female sexuality, such a ridiculous burden of proof is laid on the rape victim is horrific, and seeing a good character like Jem so enthusiastic about it bothers me.

Loss of innocence happens not just for the characters, but also for the society in which this book is read. Boo Radley is a creepy, unknown, figure for most of the book, but I found myself responding to his gestures toward the children in a very different way. What kind of man carves detailed figures of children in soap and leaves them in a tree for the children to find? Within the context of the story, Boo Radley is a rather simple, harmless man, but if such a thing happened today, my mind immediately jumps to Law & Order: SVU territory. Is this man a predator? What does he have planned for the children? Why has he observed them to the point that he can create realistic soap sculptures?

Someone on Twitter commented that while Mockingbird now is seen as a testament to how far we’ve come as a society in terms of race relations, it would have been a lot more contentious when first published. Readers would have been as divided as Atticus’ town, with some readers cheering Tom Robinson on, and others horrified that an author would paint such a sympathetic portrait of a black man.

The idea of our society having progressed beyond Mockingbird is itself rather contentious. Stories like Trayvon Martin, Jordan Davis and the “Stand Your Ground” law debate reveal dispiriting facts about the role that racism still plays in American justice. There is more of an outcry against it certainly, and in today’s world, Tom Robinson’s conviction would have merited at least an angry editorial on Huffington Post, but it would be naive to think we’ve gone far beyond the world Harper Lee critiques.

Still, the conversation I had on Twitter made me think: To Kill a Mockingbird has become such a powerful piece of literature partly because it was published at a time when such views were contentious. Atticus Finch, currently recognized as a hero, may have been viewed by some readers as a villain at the time of publication. I wonder then, what issue is just as contentious and divisive for contemporary society? And with that, what work of literature faces this issue head-on, and may have an impact as powerful for that issue as Mockingbird did for racism?

I think the closest parallel may be the question of marriage equality, or perhaps even just gender equality in general. Most of my friends, at least as far as I know, agree with me that same sex couples should be accorded the same rights as heterosexual ones. I’m less familiar with the conversations surrounding trans* rights and other similar gender issues, but as far as I’m concerned, people should be allowed to be whatever gender they really are, regardless of biology at birth. I’m dismayed by the number of people I see online who disagree with these views, and disgusted particularly by a recent bill passed in Arizona that allows blatant discrimination against LGBTQ individuals in the interest of purported religious freedom. As much as I’d like to believe these issues are past debate, they clearly aren’t, and are perhaps as hotly debated now as racial equality was back in Harper Lee’s time.