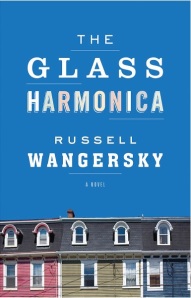 I was eager to read Russell Wangersky’s The Glass Harmonica because I’d heard a lot of praise for his short story collection Whirl Away (in particular this glowing review from blogger Bella’s Bookshelves whose taste in books I totally trust). So when I saw this novel in the publisher catalogue, I knew I wanted to check this writer out.

The Glass Harmonica begins with a man witnessing a man being killed, but it’s really the chronicle of a neighbourhood rather than a story about a crime. Just after the dedication page of the book is a sketch of McKay Street, marking the homes of various characters. The narrative moves between characters and back and forth in time. We come to realize not just the circumstances around and behind the killing but also the way in which the lives of the people in the neighbourhood intertwine.

As a mystery fan, and in particular an Agatha Christie fan, when I think of exploring the circumstances around a crime, I expect to find a complex motive, one that reveals hidden tensions between the killer and the victim and that explains why the killer went to such lengths to commit his crime. The killer’s motive in this novel is much simpler than that, and yet in other ways much more multi-layered. Because while the actual motive is simple, the story reveals all the seemingly minor events and plot threads that connect the characters, all of which have a touch of influence that somehow led to the killing.

The narrative moves back and forth in time, as well, shifts between characters. We see multiple perspectives on the same set of events, not so much a straightforward Rashomon-like retelling, but rather tendrils of stories that somehow come together to form a web. One chapter may mention an event, only for it not to be brought up again till a few chapters later on, either from someone else’s perspective, or with our own perspective coloured by other events that happened in between. Then somehow, Wangersky pulls it all together.

There were parts of this book that I really liked, however I found the format confusing and at times frustrating. In one instance, for example, a teenage girl is running away from a group of boys who are threatening her. They corner her in an alley, she faces them defiantly — and the chapter ends. I loved that chapter — it was gripping, emotional, and I really, really wanted to find out what happened next.

Unfortunately, Wangersky then follows it up with a chapter about a completely different character, and a completely different set of events. I was still so caught up in that teenage girl’s predicament that I skipped ahead several chapters until I found the next mention of her. To my dismay, that chapter was several years in the future, and the resolution to the incident in the alley was mentioned only as a memory, and therefore now lacking the sense of urgency that had compelled me to skip ahead in the first place.

The number of narrative perspectives was confusing as well. It was difficult to keep track of all the characters, and in particular of the relationships between the characters. Then, once I did get to tell the characters apart and focus on a couple who I really cared about and wanted to find out more (such as the teenage girl, for example), the narrative would switch to another perspective that I’d find less interesting. Granted, this is a risk faced by any author telling a story from multiple perspectives, or with a large cast of characters, but in Glass Harmonica, I sometimes thought there was just too much going on.

Still, Wangersky has a beautiful way with words, and when he does pull all the threads together, and the story begins winding down, the reader’s emotions begin to run high. The final two chapters are just powerful, emotional, even heartbreaking.