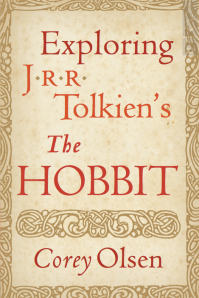 I am an absolute nerd. The reason I fell in love with The Hobbit in the first place is an English class on Children’s Literature I took in university. I’d tried to read The Hobbit and the Lord of the Rings trilogy several times (my mom bought me the book box set when the LOTR movies were released), but could never get into them. Then I took the class in university and, for some reason, parsing each chapter of The Hobbit made me appreciate the story in a way I never had before. The songs that so irritated me when I was younger were revealed as powerful, telling entire histories within a deceptively simple rhymes. I learned about the similarities between hobbits and children, and that part of The Hobbit‘s appeal to young readers is the idea of a small person being capable of gigantic heroism. In that class, Tolkien’s magic finally swept me up, and led me to continue reading till Return of the King. I am late to Tolkien fandom, but I now consider the series among my favourite books of all time.

So you can imagine my reaction to Corey Olsen’s Exploring J.R.R. Tolkien’s The Hobbit. Here is an opportunity to learn from another professor, learn another perspective on this book! Olsen is well-versed in Tolkien’s body of work, and it shows — while he focuses on The Hobbit as a separate book, he also mentions various points where bits of The Hobbit are connected to Tolkien’s other books. Tolkien’s work invites a wide variety of ways to nerd out — people have studied the languages of Middle Earth, and others have studied the geography. There are even Middle Earth inspired cookbooks for culinary nerds.

Olsen’s book is a feast for literary nerds. Did you know, for example, that the version of The Hobbit we read today is not how the story was originally published? The legendary Ring that Bilbo finds in Gollum’s cave was originally just a ring of invisibility, and Gollum was originally an ancient creature who had every intention of playing the riddle game fairly and giving Bilbo the ring as a prize. Then, when Tolkien started writing Lord of the Rings, he decided to turn Bilbo’s ring of invisibility into the Ring of Power that sets off the events in the trilogy. This change meant that he had to rewrite Gollum’s character and change his motivations considerably. The story of The Hobbit itself still remained mostly intact, but Olsen points out a few tweaks that Tolkien made to the revised edition, and suggests how these revisions made the book fit more seamlessly into the entire saga.

Olsen also delves into a close reading of each chapter, pointing out significant moments in Bilbo’s character development, and analyzing the riddles and songs in the book. I love the chapter on “Riddles in the Dark,” where Olsen details how the Bilbo and Gollum’s riddles reveal not just their respective characters, but also, collectively, chart an escalating argument between light and dark, happiness and despair, life and death. I especially love how Olsen uses the songs of dwarves, elves and goblins (orcs, as they are known in Lord of the Rings) to reveal the character traits of each race.

I had a great time indulging my inner nerd with this book.  I’m not much of a Tolkien nerd, in that other than Mordor and Hobbiton, I would be hard-pressed to name any other place in Middle Earth, much less point them out on a map. So if you are a Tolkien nerd, if you know the various languages spoken in Middle Earth, for example, I don’t know if this book will tell you much that you don’t already know. But if you love reading The Hobbit over and over, and you actually enjoyed nerding out in English literature classes, I highly recommend this book. My copy is underlined, dog-eared, and full of marginal notations. It’s utterly fascinating, and above all, made me want to read The Hobbit yet again. Anyone up for an adventure?

Thank you to Thomas Allen Ltd for an advance reading copy of this book in exchange for an honest review.