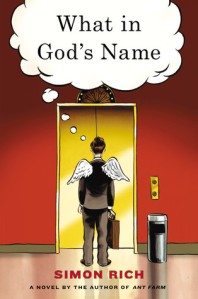 Simon Rich’s What in God’s Name is a light-hearted, somewhat ridiculous, yet still rather endearing take on the end of the world. Rich’s novel casts God as the deadbeat CEO of Heaven, Inc. Having phoned it in for years, God decides one day to pack it all up, destroy Earth, and open an Asian fusion restaurant. Rich’s tone is irreverent, reminding me of Christopher Moore’s Lamb, and as in really good comedies, there’s a degree of uncomfortable truth behind the laughter. The idea of God as an incompetent or uncaring CEO, in danger of losing people’s faith or becoming irrelevant, can hit uncomfortably close to home, and in the hands of a different type of comic, this novel could have turned into a much darker, more biting satire.

The edge is certainly there — Rich’s God reminds me somewhat of the benign, rather senile, version of the Authority in Philip Pullman’s The Amber Spyglass — but Rich coats it in such endearing, somewhat slapstick-ish romantic office comedy that it’s easy to ignore. What in God’s Name is told from the point of view of Craig and Eliza, the Jim and Pam of Heaven Inc. Overworked and underpaid angels in the Department of Miracles, Craig and Eliza have developed an affection for humanity and really don’t want the world to end. So they strike a deal with God — if they can make socially awkward humans Sam and Laura fall in love before Armageddon, God will call the whole thing off. Bargaining with God is a tradition that dates back to the Old Testament, and Rich gives it a sweet, Little Mermaid-type twist.

There’s little urgency to the novel’s Armageddon. Rich’s narrative is so cheerful that you can’t help but feel that the writer just won’t let anything really bad happen. Yes, it will suck if the world ends, but Heaven Inc’s lackadaisical attitude toward natural calamities rubs off somewhat. God seems so excited about opening a fusion restaurant, and his employees so eager to take early retirement that we don’t really think about the plagues and earthquakes and other such horrors. Rather, we care about the world ending because we care about Craig and Eliza, and about Sam and Laura. We want both couples to fall in love and, in the case of Sam and Laura at least, we want them to still have a world in which to stay in love.

Romance is at the heart of What in God’s Name, and Rich does especially well with the will-they-or-won’t-they chemistry between Craig and Eliza. Their conversations are funny and awkward, and just really romantic. Take for example one of my favourites, where they discuss Sam and Laura:

“Hey come on,” Craig said. “He asked her out, right? That took some guts.”

“He didn’t ‘ask her out,'” Eliza said. “He asked her if she wanted to ‘grab coffee sometime.'”

“That’s asking her out,” Craig said.

Sam and Laura’s romance isn’t quite as exciting, and I cheered them on mostly so that Craig and Eliza would succeed in their mission and perhaps go out on a date themselves. On one hand, it’s a nice change of pace not having the super hot hero/heroine couple usually found in romance, but on the other hand, a side effect of making the Sam and Laura romance mission impossible is, as Eliza observes, “They’re the most unappealing humans I’ve ever seen.” [p. 187] Laura actually isn’t bad, but Sam is a caricature loser. It’s sweet seeing him spend hours drafting and discarding one horribly written email after another to Laura, but the descriptions of him as a complete recluse whose only human contact is the delivery guy makes me think Laura could do much better. Their encounters are awkward, painfully so, though there are some moments, later on in the story, of actual chemistry. Rich goes all out on the ridiculous and the slapstick in Sam and Laura’s romance, and it’s hilarious to see Craig and Eliza scramble to create  the most random miracles just to help Sam and Laura along.

What in God’s Name is funny, touching and romantic. It’s a quick, entertaining read with characters you want to succeed. Even God as a CEO is a rather loveable bumbler, and it’s hilarious how his chosen prophet for the age is a crazy homeless guy at a street corner. The stars, however, are Craig and Eliza, and like Jim and Pam in The Office, they provide warmth, a heart for the book’s centre.

3 thoughts on “Review | What in God’s Name, Simon Rich”