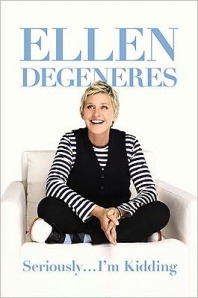 Reading Ellen DeGeneres’ Seriously… I’m Kidding is like having a casual, one on one conversation with Ellen herself. The book is hilarious, rather sweet and oddball, with the wonderfully sunny outlook on life that has become Ellen’s trademark. It also often veers into the pointless, with sight gag chapters that probably would work well as minor sketches on her show, but are just worth skimming in a book. On the bright side, I’m Kidding is overall a feel good book, cheerful and optimistic without being preachy. It’s Ellen, on the page, and a fun way to spend your commute.

There are a few completely random chapters. One can almost imagine her Finding Nemo character Dory narrating some of the passages, with their pointless digressions and wide-eyed punchlines. In one chapter entitled “Ideas,” for example, Ellen rambles about everything from smiling to astronauts. Presumably, she means to mimic the brainstorming process, how each idea leads on to another with the barest minimum of connections, and so on. Except it plays out like a comedy routine that seemed funnier than it really is, and the punchline, “I’m sorry, maybe I shouldn’t have written this chapter,” backfires when the reader reluctantly agrees.

Others, like “For the Teenagers” and “Magic,” are sight gags, possibly worth a chuckle when read, but nothing that will make you remember once the page is turned. These stand in sharp contrast to some genuinely great bits of comedy in the book. Take for example “How to Be a Supermodel,” a how-to guide based on Ellen’s experience as a Cover Girl model. The tips in this chapter are sharp and insightful, comedic gems. Take for example:

One: The Look
Always look like you’re angry at the universe for making you too pretty. [p. 11]

Ellen is at her best however in the somewhat more serious chapters. She never allows herself to become Oprah-esque, pulling back with a wisecrack just when she’s dispensed some bit of wisdom. The overall effect is that of a woman who is afraid to let the mood get too sombre, and who therefore undercuts her own advice with humour. That being said, in many of these instances, the humour actually enhances the impact of the advice, and at times reveals further insight.

Ellen’s chapter on “Labels” stands out as possibly the most serious. Apart from an offhand joke about her Cover Girl endorsement and a gentle scoff at musical theatre, Ellen reflects on how much she’s been labelled. In a particularly striking line, she admits,

It didn’t occur to me that when I announced I was gay I would have to clarify just how gay I am. What does it matter? What does it mean? All I can say is I’m gay enough for me. [p. 93]

In one of my favourite chapters, “What Would Jesus Do?” Ellen talks about magazine polls and the culture of judgement. Much like the chapter on the meaning of life, Ellen switches from thoughtful observation to quick quip and back again throughout this chapter. Giving the example of a poll that asks “Hot pink dress — is it a do or a don’t?” Ellen demands:

Who cares? If you want to wear a pink dress, wear a pink dress. It doesn’t matter what other people think. One hundred percent of the people polled could say a pink dress is a “do” and guess what? I still ain’t wearing one. [p. 54]

Ellen’s independence and self-confidence are among the many things that make her such a great role model. That passage just about made me applaud. Ellen continues:

All these polls do is make everyone so judgmental. And I don’t believe in judgment. Unless is judgment of judgment. I don’t think someone has to “wear something better” or have a better hairstyle. That’s why the word “different” exists in our language. [p. 55]

She immediately undercuts that inspiring passage with a joke, but then switches right back into incisive observation so seamlessly that the interjection of jokes feels natural.

Seriously… I’m Kidding is very much hit or miss, on a chapter by chapter basis. Overall, however, it’s a fun read that just has Ellen’s wonderful personality shine through. You’ll feel good while reading it. The flapjacket copy that promises

If you buy it, you will feel better, look better, be happier, grow taller, lose weight, get a promotion at work, have shinier hair, and fall madly, deeply in love.

is a joke, but like many chapters in the book, holds a grain of truth. Ellen’s humour is so infectious that this book will most likely cheer you up, and if you haven’t fallen in love with Ellen yet, some chapters in this book might make you do just that.

Thank you to Hachette Book Group for a finished copy of this book in exchange for an honest review.