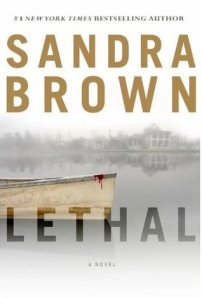 Lethal by Sandra Brown is a fun romantic thriller. Honor was enjoying a quiet day with her daughter Emily when both are taken hostage by suspected mass murderer Lee Coburn. Hardly the set up for romance, except it turns out that Lee has his own version of what happened the night of the murders. He also thinks Honor’s husband had been killed over a secret, and that that secret has now made Honor and Emily a target for The Bookkeeper, a mysterious, ruthless crime lord. Who can Honor trust, and will Coburn keep her and Emily safe? Lethal goes from plot twist to plot twist rapidly, and the chemistry between Honor and Coburn is great.

It was a bit difficult to see Coburn as a potential hero in the beginning — he was still bloodied up and injured from the evening of the murders, and he kept threatening Honor with Emily’s safety if she didn’t cooperate. So I’m glad Brown kept the sexual tension in these scenes to a minimum — we see hints of Honor and Coburn finding the other attractive, enough to set up the eventual romance, but the focus is on Honor’s fear and her concern for Emily.

Once Honor decides to trust Coburn, the story really takes off with a hunt for Eddie’s secret and to escape from The Bookkeeper. While I don’t usually like the kid characters in thrillers like this, I thought Emily was well done. Her innocence and charm help counterbalance Honor’s fear, and urge out Coburn’s softer, sweeter side. The mystery was well done — I had no idea what Eddie’s secret was, and with even Coburn in the dark, I had no idea how they could find out. I somewhat guessed the identity of The Bookkeeper before the big reveal, but that was probably more luck than anything (as in I had about three major suspects and one of them turned out to be right).

On a minor note, there’s a subplot that I loved, about the FBI agent Tom, his wife Janice and their special needs child Lanny. Tom is a desk jockey, somewhat out of his depth in a murder investigation (the manhunt for Coburn), yet hopeful that his more exciting role will impress his wife. In a touching scene, Tom suggests to Janice that they put Lanny in a facility.

…he spoke before she could. “That’s not a criticism of you. Your patience and endurance amaze me. Truly. But caring for him is killing you.”

“Am I? It’s shredding you, body and soul. I see evidence of it daily.”

“You can look into my soul?”

Her sarcasm was more effective than a flat-out rebuke would have been. [p.101]

In the midst of all the thrills and adrenaline over Honor and Coburn’s story, Brown gives us this quiet, fraught exchange between a long-married couple. It’s an intense scene, one that immediately made me care for both characters and want them to work things out. That scene ended even more sadly, with Tom going to bed and realizing his wife preferred playing word games on her phone with someone in Singapore to sleeping with him. The Tom and Janice story turned out to have a bit of a twist in the end, adding even more layers to their relationship. Personally not too happy with their part in the story, but I do like their characters.

I’m also not too thrilled with the way Lethal ended. It just felt gimmicky to me, and I wish Brown had opted for a more traditional ending. Still, I like the chemistry between Honor and Coburn, and I thought the mystery was fun and fast paced. Overall, Lethal is a fun, exciting, romantic read.