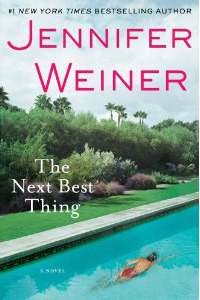 I like Jennifer Weiner. I like her Bachelorette tweets, and I applaud her for calling attention to the gender imbalance in mainstream book reviews. I loved In Her Shoes  — that scene where Cameron Diaz’s character (who has difficulty reading) reads a poem for her sister’s wedding makes me cry every time. And yes, when I read it in the book, that scene made me cry as well.

So, when in the mood for a fun, lighthearted read, I decided to pick up Weiner’s new book The Next Best Thing. The book is about Ruth Saunders, a young writer who moves to Hollywood with her feisty grandmother and gets the green light for her sitcom, the eponymous Next Best Thing, about a young chef who moves to the big city with her feisty grandmother. Fine. A lot of writing is autobiographical, and even with the additional meta layer (meta meta?) of Weiner herself having been a screenwriter, I could deal with it. After all, I started the book looking for a fun, lighthearted read, not an earth shattering emotional tale.

Weiner adds gravitas to her character by giving her physical scars. Ruth’s parents died in a car crash when she was a child; she’d been in the car with them and her scars had never healed. In one of the few truly poignant scenes in the book, eight year old Ruth writes in her diary, “I will never be beautiful.” Personally, I thought it was a bit much — physically scarred Ruth writes about an overweight chef, hoping to inspire other girls who don’t fit the traditional idea of physical beauty. Ruth also falls in love with a man who is paralyzed from the waist down. It’s a bit heavy handed with all the physical and emotional scarring, though to Weiner’s credit, she never gets maudlin about them.

Here’s the thing though: I really didn’t like Next Best Thing. It read like a mediocre sitcom meandering from plot point to plot point yet never hitting its stride. My overall reaction: meh. And in my view, such indifference may be an even worse reaction than utter disgust. 50 Shades of Grey at least, while much, much more horribly written, at times fell into the “so bad it’s funny” category. Weiner had some funny lines — I especially love the description of one man as looking like a favourite uncle who’d bring you the latest Baby Sitters Club book, and one woman whose cleavage was big enough to hide an iPad. Overall, however, I was reminded of something a character said about the process of a screenplay being turned into a TV show: it’s a lot of waiting. Reading this felt like that, checking off plot point boxes one by one while still waiting for something to happen that’ll make you care.

The crux of the plot is that Ruth had written a screenplay that would inspire the everywoman. Her character was plus size, insecure, yet witty, and that character’s success will inspire the viewers to go for their own dreams. Hollywood takes over Ruth’s show and begin to turn it into a standard sitcom, with a size zero heroine, crazy sex-crazed elderly lady and stupid, sexist jokes.

This story could work only if we believed that Ruth’s original screenplay was worth fighting for. It’s not. We are given scenes with Ruth’s unadulterated vision, and later see her dismay at the studio’s interference, and all I could think of was that while the edits did make the show more stupid and offensive, they weren’t much worse than the original. The scene that Ruth was so proud of, an emotional, rah rah scene between the heroine and her grandmother, just sounded trite. I admit, a confrontation scene between the heroine and an ex-boyfriend did make me cheer, but that was one good moment in a TV show pilot that we’re supposed to believe would have been the next Golden Girls, if only Hollywood hadn’t interfered. It’s not. Even Ruth’s original is blah, and because of that, the stakes for the entire story are depressingly low.

As for the subplots — Ruth’s relationship with her grandmother and her crush on her boss (the aforementioned paralyzed man in a wheelchair) — again, the stakes just aren’t high enough to care. The grandmother is the most colourful, most interesting character in the book. I love the description of her waltzing into a restaurant like a movie star and the maitre’d wondering  who she was. Unfortunately, she isn’t given many interesting things to do, and serves mostly to provide rah rah support to her granddaughter. Even the big conflict that put Ruth and her grandmother’s relationship at risk — while it did have the potential to be big and emotional — barely fizzles. The romance is sweet, and the sex scenes endearing, but again the conflict feels contrived and the outcome easy.

4 thoughts on “Review | The Next Best Thing, Jennifer Weiner”