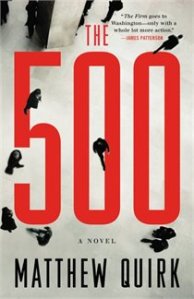 James Patterson compares Matthew Quirk’s The 500 to John Grisham’s The Firm and it’s easy to see why. Just like Grisham’s protagonist, Mike Ford is a fresh-faced hot talent who gets in way over his head in a high-powered career. Quirk takes the premise to Washington — “The 500” refers to the 500 most powerful people in Washington, usually those pulling the strings from the sidelines. Mike Ford has been hired straight out of Harvard Law School to join the Davies Group, Washington’s most powerful consulting firm. The Davies Group mandate is to make things happen for their clients, and that usually entails convincing one or more of the 500 to agree to something. As an ambitious young man raised in poverty and with a con man for a father, Mike’s street smarts provide fresh perspective for the Davies Group, otherwise staffed with privileged intellectuals.

The 500 is more action-packed than I remember The Firm to be. While The Firm, from what I remember, dealt a lot with the protagonist’s loss of innocence and the development of his relationship with his wife, The 500 focuses on the mystery — what are Mike’s bosses hiding? What do they want with an alleged war criminal? Why are they shutting Mike out and can Mike trust them? Unlike Grisham’s protagonist, Mike begins this story no longer an innocent. He has been trained by his father to be a con man, and has since struggled to live on the right side of the law. Unfortunately, his employment at the Davies Group forces him to use his long-suppressed con man skills, first to succeed, then later on, to survive.

Davies Group founder Henry Davies has built his empire on the tenet that everyone is corruptible. There’s an interesting reversal here — the law-abiding “good guys” manipulate people into corruption, and Mike’s old law-breaking “bad guy” acquaintances may be the only ones he can trust. It’s an old notion, and one that I think Quirk hammered home far too much. At one point near the end, just in case we hadn’t gotten the point yet, the narrator makes just that observation. It turns an otherwise fascinating story into a morality tale, and I wish it had been handled more subtly.

I do love the relationship between Mike and his father. Mike has tried his whole life not to become like his father, yet we see early on how much his father has influenced his life. I love the way Mike’s understanding of his father develops — it felt more genuine than Mike’s romance with a co-worker, and added a nice touch of emotion to this thriller. The romantic subplot was okay. At times the love interest felt more like a kick-ass Angelina Jolie fantasy figure — the perfect partner for a con man, who may or may not be trustworthy — than an actual woman.

Overall, the best part of The 500 is the mystery. I love that I couldn’t figure out what the Davies Group was up to, nor could I tell who Mike could trust. More than the Davies Group tenet that everyone’s corruptible, the House M.D. idea that everyone lies holds true in this book. The mystery was fast-paced and exciting, with unexpected twists. A lot of the action scenes and coincidental twists were a bit far-fetched, and would probably work out better on a TV or movie screen than a book. As well, despite the Washington D.C. setting, I would not consider The 500 to be a political thriller — I know there are major political consequences to the actions of the Davies Group, but the narrative was too focused on Mike’s experiences within the company to explore the bigger political picture. That being said, The 500 is a fun read and hard to put down.