Last year, I returned to the Philippines after about two or three years away. It was an odd experience, driving around the city where I’d grown up — the landscape was both familiar and alien. Every time I saw a place I remember well, I’d see a new addition, new facade, at times even a whole new building beside it — an unescapable reminder that I’d been away, and that the once familiar locales have moved on without me. 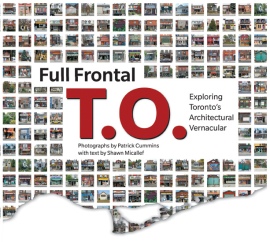 I remembered that experience well, during the Coach House Books launch for Patrick Cummins and Shawn Micallef’s Full Frontal T.O. The wall at the entrance to Urbanspace Gallery featured text by Micallef, but for the most part, Cummins’ images were posted on the wall without comment, at times even without dates. So while I viewed the photos with fascination, as a new Canadian (a GTA-er, yes, but not even a Torontonian), I lacked the context that infused others at the launch with nostalgia. “I pass by that area everyday,” someone told me, pointing to one of the photo sets. Another said trips to Chinatown were a childhood tradition, and seeing Cummins’ images of that area brought forth all these memories. Still another loved the pages in the book about her neighbourhood — she remembers how the street has changed and loves how this change was captured on paper. I can only imagine how a similar book on the city I grew up in — Full Frontal Manila, anyone? — would affect me. So for all who grew up in Toronto, all who live in Toronto, or all who love Toronto — definitely give this book a read.

For those like me — I love Toronto, but don’t have that twinge of recognition and nostalgia at photos of the city from the 80s and 90s — Full Frontal T.O. is a fascinating read. Confession: I love old buildings. I love visiting them and imagining the people who lived or worked in them years ago. The stories they can tell! And I don’t just mean official historical monuments — personally, I find hidden history much more fascinating, the stories of ordinary individuals who have made tiny, almost invisible marks on history. Point is, I loved the idea behind Full Frontal T.O. even before having seen the book. Cummins spent years taking photographs of the same spaces over time. We get to see a city change, and we get to imagine the tales that come with these changes. Very cool.

Then you add text by Shawn Micallef, and I’m definitely hooked. Those who have ever asked me for a Toronto book recommendation, or who have read this blog post know how much I loved his previous book Stroll. Micallef has a knack for turning the quotidian into an adventure, and his writing in Full Frontal T.O. is no exception. In his introduction, Micallef writes that because “we know we’re supposed to like pretty or big things,” we immediately associate with Toronto big landmarks like the CN Tower. However, “ragtag” buildings that “would never make it on to a Toronto postcard” are actually “the real Toronto,” the city in which most of us live. He writes,

Because we seem to look elsewhere all the time in Toronto — to a shiny new part of the city, or one of our older gems, or a possible future we might dream of — much of Toronto passes below our radar, even though we’re deep in the middle of it every day. We’re missing out, though.

Full Frontal T.O. calls attention to the city “below our radar,” the “vernacular Toronto,” as Micallef calls it. It’s why people who have lived in Toronto for years feel not just the joy of recognition, but also the thrill of surprise at Cummins’ choice of subjects to photograph. It’s also why people like me, who are relatively new to Toronto, feel an even deeper affinity with the city after reading this book. Full Frontal T.O. reveals a Toronto beyond the usual tourist landmarks, and thereby makes insiders of us all.

Micallef writes that the city is in constant flux, and that’s certainly true. Looking at Cummins’ photograph can be surprising at times by how little a space can change over time — 1042 Queen St W, for example, was a Printing shop from 1988 – 2004 (with a phone number beginning with LE, how long had it been there?). Thing is, and this is something I missed on my first reading, if you flip a couple of pages back, you’ll also see a spread on 1042 Queen St W, showing how by 2009, the Printing shop storefront had been replaced by a mural. Google Street View still shows a mural at this address, though I’m not sure how old that image is, and a March 2012 article at The Grid TO reveals the address is still unoccupied. Things you learn, eh?

Full Frontal T.O. is a fascinating read. Personal favourites include the spread on 148 Huron Street, mostly because of its description as “a feral house. They fed the fence to the plants and the plants liked it.” The images of the trees literally engulfing the front of the house until they were trimmed by the 2011 photo looks almost like the setting for a horror movie. I also loved the section on Gothic cottages. I had no idea until reading this book that Gothic cottages are “those with the peak over the front door.” Personally, I just think it’ll be really cool to say that I lived in a Gothic cottage.

Micallef writes that the book doesn’t contain a map, and doesn’t have the photos in any sort of geographical order because “it’s more fun this way.” He suggests that we “open the book anywhere. It’s all Toronto.” Sounds good to me. I did have fun flipping through Full Frontal T.O. It’s a photographic adventure into Toronto’s past, all in a handy little book. However, the best thing for me is that the book invites readers to explore Toronto themselves. Because the city keeps changing, even the most recent photographs may soon be outdated. When we visit these locations Cummins has photographed, what will we find? Fast forward ten years, or possibly even just ten months from now — what will we find then? Full Frontal T.O. explores the city, but the adventure can last as long as you want it to.

The Full Frontal T.O. Blog aims provide an online forum of the work. Did you live in this house? Work in this storefront? Have an amusing anecdote to tell? If so, please add comments to the photos. We can to create an online living history of these buildings, and only you can help us do that!

Check out the blog at http://fullfrontalto.wordpress.com/ and join in the creation of an online living history of Toronto buildings!