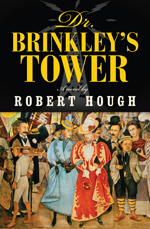 I loved Dr. Brinkley’s Tower! Not only did it transport me to 1930’s Mexico, but I was also struck by how relevant some of the themes still seemed today. The story is lush, romantic, beautiful, and I fell in love with the characters. You can read my review here and comment for your chance to win a copy, courtesy of House of Anansi.

House of Anansi was also kind enough to set up an interview for me with Dr. Brinkley’s Tower author Robert Hough. From the publisher website:

Robert Hough is an award-winning novelist. He lives in Toronto, Ontario.

Q  & A with ROBERT HOUGH 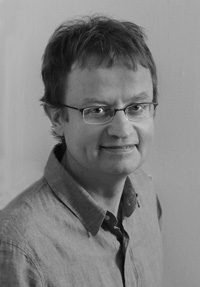 1. Dr. Brinkley’s Tower is based on an actual historical figure. What about the real-life Dr. Brinkley inspired you to write this novel?

It wasn’t so much Brinkley himself that inspired me: it was more the effect that his radio tower had on the town. When living next to a million-watt radio transmitter, you can’t get away from the signal. It broadcasts through anything metal: braces, fencing wire, forks, weather vanes, you name it. Also, at a million watts, radio waves light up green in the skies. So I just imagined these poor Mexicans being driven crazy by the radio tower’s signal, and not being able to sleep at night. In other words, it was an irresistable environment in which to set a novel.

[BLOGGER’S NOTE: I’m fascinated that the part about the signal actually causing radio waves to transmit through metallic objects is based on fact. This causes quite a few problems for the residents of Corazon de la Fuente. The effect of this phenomenon on one resident in particular actually made me downright detest Dr. Brinkley for erecting that tower in the first place. – JQ]

2. Among my favourite scenes in the novel are the gumball contest and the scene where the Corazon de la Fuente mayor stands up to a racist foreigner. Having grown up in the Philippines, I was struck by how real your depictions of poverty and racism were. Why did you decide to make these themes so prominent in your novel, and did you do any research on this?

In the book, the townsfolk are delighted when Brinkley decides to build his tower: they’re poor and emotionally drained from the Mexican revolution, and they need the jobs and sense of promise it will bring. Of course, they don’t wager on the tower being such an obnoxious presence. As the tower starts to drive them all crazy, it stirs up old divisions and resentments, and they all start to fight; yet it all hinges on them being poor and desperate at the beginning of the book.

As for research, I already knew Mexico pretty well, though I did take a trip to northern Mexico, where I was just the third visitor to a tiny town on the border that served as a model for my fictional town.

[BLOGGER’S NOTE: You can read about Robert’s visit to this tiny Mexican town in his essay for the National Post. – JQ]

I loved all the characters in the book, even the bad guy Brinkley. The great thing about Brinkley is that he really did believe that his goat-gland operation had merit, and that his radio transmitter was helping the people of Corazon de la Fuente. As for all the Mexicans in the book, I just liked them all because each one was so colourful in his or her own right. They were a pleasure to spend time with, and I think the reader picks up on how much fun the book was to write. People are telling me that they’re reading the book in one or two sittings, and that’s really what I’d hoped for.

[BLOGGER’S NOTE: They were a pleasure to read about! – JQ]

Thank you very much to Robert for participating in the Q & A, and thank you to Trish from House of Anansi for organizing this!

Again, just a reminder that I’m giving away a copy of Dr. Brinkley’s Tower. Details on my review.