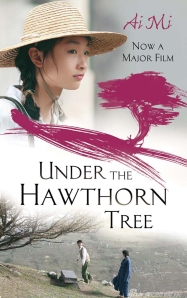 Ai Mi’s Under the Hawthorn Tree was a wonderful book to kick off the weekend before Valentine’s Day. Set in China during the Cultural Revolution (early 1970s), Hawthorn Tree tells the love story of high school student Jingqiu and geology student Jianxin, nicknamed “Old Three.” They come from very different social, economic and political backgrounds, yet they fall in love. But, the publisher’s book description tells us, “their budding romance is cut short by fate…” This book has been made into a movie by House of Flying Daggers director Zhang Yimou, and the film’s promotional tagline was “the cleanest romance in history.” So I began the book expecting a sweet, innocent romance, possibly tinged by tragedy. Best part is that it’s set in an exciting time in Chinese history — I admit I know little about this part of history, and, being half-Chinese, I was eager to find out more about it.

In a lot of ways, Hawthorn Tree was what I expected — the romance between Jingqiu and Old Third is sweet and innocent, and the romance really picks up once Jingqiu finally acknowledges are feelings for Old Third. The last few pages of the book are especially touching, and the last line in particular made me feel like I just read the kind of epic romance that spans generations.

Being half-Chinese and having grown up in the Philippines, I did not expect the level of culture shock I had reading this book. The world Ai Mi has created of China during the Cultural Revolution is so different from the world I know. It certainly feels different from the China of The Good Earth and from other books I’ve read set it in the 1970s. Even though the book is narrated in the third person, we remain firmly within the extremely naive, sheltered perspective of Jingqiu. Translator Anna Holmwood warns us in her introduction that the degree of Jingqiu’s innocence may seem incredible to a Western reader, but that this just reveals “the startlingly intimate reach of politics in that period.” As a 21st century reader, I found myself in the odd position of seeing only Jingqiu’s limited view of events while understanding so much more than she did. At times, this was frustrating, and I had to keep reminding myself that what I may view as overly defensive is completely natural behaviour given the character’s circumstances.

I was fascinated to learn about this period. I love that Jingqiu completely believed Chairman Mao’s teachings, because it offers such a different perspective from what I’m used to reading. Her father is a political prisoner and her mother, branded a capitalist, has been forced into menial work, so I can definitely understand why Jingqiu is extremely hesitant to even think anything vaguely revolutionary. More than that, however, Jingqiu takes pride in doing heavy manual labour and finds it difficult to understand why the “noble peasants” aren’t more excited about living the communist ideal.

Jingqiu’s mother warns her about boys, but, like Jingqiu’s friends and the books she’s read, is very vague about specifics. Jingqiu knows that going for a walk with a boy can lead you to trouble, but all she knows is that there are girls in her class who suddenly turn up pregnant and either kill themselves or are disgraced. At one point, her brother is arrested because he and his girlfriend were caught in bed together — hard enough to believe from our point of view, but even harder to believe is that both were fully clothed and, according to the girlfriend, doing nothing but sitting at the edge of the bed with a blanket over their legs because it was cold. Even if the girlfriend was lying (just sitting? sure…), Jingqiu believes her, yet thinks, but they were sharing a bedroom, which is what husbands and wives do, so what does the girlfriend mean they were doing nothing? It’s not so much that Jingqiu finds the idea of being in a bedroom together scandalous, but that she honestly doesn’t know what exactly husbands and wives do in the bedroom other than share it.

At times, Jingqiu’s naivety can be funny. For example, when she and Old Third go swimming, Old Third asks her to go out of the water first, and she notices he looks uncomfortable. She asks him why he’s so shy about her seeing his legs and if he has a cramp, then offers to rub it out for him. Her unintentional innuendo and Old Third’s utter embarrassment are just really sweet. Other times, however, her innocence and concern over protocol can be frustrating — Old Third seems like such a nice guy that I want them to get together already. Then I remind myself that Jingqiu grew up in a different culture, and when questionable details come up about Old Third’s past, she really feels unable to confront him.

Old Third is a likeable hero. He is clearly concerned about Jingqiu — he begs her not to do the heavy manual labour as it’s too dangerous for a woman. My inner feminist reacted to that, but then again, her work sometimes required her to carry hundreds of pounds of material up and down hills. He helps her out by giving her money, but always through someone else, because he knows Jingqiu is too proud to accept money from him. I of course wanted to tell her to stop being so stubborn and just take the money already — at times, their exchanges of money, with Old Third sneaking it to her and Jingqiu sneakily returning it and so on, go from funny to a bit ridiculous. He’s a sweet guy, and his bewilderment whenever Jingqiu scolds him for doing something improper (usually nothing more serious than give her an extra piece of meat at dinner) is endearing.

Hawthorn Tree is a delicate love story. Ai Mi does a fantastic job making us feel the fragility, even brittleness, of Jingqiu and Old Third’s relationship within their society. The slightest slip, and Jingqiu’s future can be compromised forever. I do wish Jingqiu had been less defensive and Old Third less gun shy, but I did cheer for them as a couple. Theirs certainly is a “clean” romance, and at times almost endearing in its innocence.