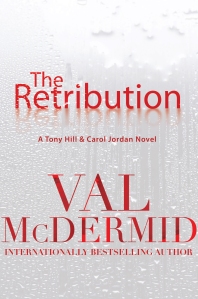 I first read Val McDermid a few years ago, when I was really into psychological mystery thrillers. I read The Mermaids Singing, and, coming from Alex Delaware and Alan Gregory, found Tony Hill’s story really disquieting. The torture scene disturbed me so much I stayed away from other McDermid books, even though I admired her skill as a writer.

A few months ago, I found a copy of Mermaids at a library book sale, and thought to have another go at it. It was as dark and well-written as I remembered, though I no longer got as freaked out over the torture scene. Frankly, that in itself is disquieting. I blame Lisbeth Salander.

Bright side is that I then felt ready to read The Retribution, latest in the Tony Hill/Carol Jordan series. Retribution brings back Jacko Vance, a serial killer first introduced in Wire in the Blood and, from what I hear, one of Tony Hill’s most evil antagonists. Retribution is very much a series book, building on developments from other books. As a relatively new McDermid reader, I loved reading about deepening relationships and emotional scars from past events without feeling lost, and I can imagine how much richer an experience it would have been for someone who’s followed Tony and Carol through the past dozen or so books.

In Retribution, Jacko Vance breaks out of prison and is out to seek revenge against the people who captured him in the first place. He’s a malevolent and horrific figure, and even without having read Wire, I can understand the depth of Tony’s fear at learning of his escape.

More interesting, however, is that Vance’s break from prison is the catalyst for a story that delves really deeply into Tony Hill’s past and his psyche. Tony is a bit of an anti-hero. He’s so good at psychological profiling because he can really get into the mindset of a psychopath. Much like a broodier version of Dexter Morgan, Tony mostly “acts” at being human, acting much as he observes humans are supposed to act. The line between profiler and psychopath is so delicate in Tony Hill, and I love how Retribution reveals so much about Tony’s past, about his relationship with his cruel mother and about the motherly figure who kept him just this side of human.

We also meet Tony’s mother in Retribution, and I love how formidable a figure she is! I feel bad for Tony having to grow up with such a cold-hearted woman, but she’s definitely a fascinating character. I love the development of Tony and Carol’s relationship in this book. Jacko Vance’s actions threatened not just their romance, but also their friendship, and I was cheering them on all the way.

If you’re a long-time Val McDermid fan, you’ll definitely love Retribution for the way it explores character story arcs. If you’re relatively new to McDermid, Retribution is a good place to jump right into her work; I found it fascinating. Either way, McDermid is definitely a master at crafting an exciting psychological crime mystery/thriller, and Retribution is a gripping read.