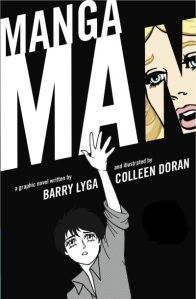 What a fantastic concept! A boy from the world of manga (Japanese comics) lands int he real world and falls in love with the prettiest girl at his high school. Only thing is, in true manga fashion, his eyes literally turn into hearts when he sees her. His classmates find this rather… odd. There’s that added sly wink at the reader because, to us, Marissa and her classmates are as much characters in a comic book as Ryoko is to them, and writer Barry Lyga and illustration Colleen Doran certainly make the most of this metafictive aspect. I love Mangaman for its hilarious and surprisingly touching love story, and I especially love its fantastic mash-up of two completely different comic book styles — American realism working with Japanese fantasy. Ranma in Riverdale. Love it. Check out the book’s site for a preview: http://mangamanlives.com/.

I expected to be delighted by Mangaman; I did not expect to be moved by it. Ryoko’s manga-style special effects are involuntary and therefore hilarious, but there’s also an element of tragedy to them, because all he really wants is to fit in, and he never can. I love Ryoko and Marissa’s first encounter: It’s a party and Ryoko is introducing himself to his classmates and asking them not to be afraid of him when he catches sight of Marissa. Immediately, flowers and excitement lines burst from him, and his entire body transforms into a drooling, flappy-armed beanie doll with bulging heart eyes and fiery hair. “I’m sorry,” he says, squishing his cheeks back to ordinary proportions, and poking a heart back into an eye socket. “I’m not going to hurt anyone.” Marissa stares in shock, flowers still fluttering down around her. Hilarious image, yes, yet Ryoko’s humiliation is palpable, and the image of him so desperately, so physically, trying to mould his features back to normal touched me. I just wanted to hug him and tell him there’s nothing wrong with literally exploding out of your skin when you see the one you love.

Cultural misunderstandings arise as well. When Marissa’s ex-boyfriend tells Ryoko to stay away from her, Ryoko exclaims “I know this part!” He strikes a fight pose and says “Big-time high school challenge! Awesome karate fight!” Special effect-filled battles may be fairly common in manga, where characters never really stay hurt, but they have real consequences in Marissa’s world, and Ryoko’s certainty that he’s finally found a familiar custom dissolves into the realization that he’s just set himself apart as more alien than ever.

I was cheering on the love story all the way. While Marissa’s classmates are turned off by Ryoko’s strangeness, she is drawn to him. He offers her something different from a life she finds bland and restrictive. Her choice of a Japanese outfit for the party at the beginning of the book is a bit kitschy, but her desire to reinvent herself without a clear idea of what she wants to become is something many will relate to. In their own ways, neither Ryoko nor Marissa fits in, and their romance works because their relationship allows them to view their standing out as something to celebrate.

Mangaman can be as much of a lark or as deep and textured of a tome as you choose. Ryoko is the ultimate visual metaphor of children and teens who feel they don’t fit in, and can never help but stand out, for whatever reason. The story encourages new perspectives — you need to look beyond the frame (literally for comic book characters) to discover the more exciting world beyond your own experiences. I also enjoyed the metafictive aspects — a comic book character in the “real world” of another comic book within our real world and what are the boundaries of reality, etc. I like the cross-cultural angle — West meets East, comic book style. At its heart, however, Mangaman to me is ultimately a funny, sweet story, told in beautiful, genre blending illustrations, and I hope it will touch and delight you as it did me.