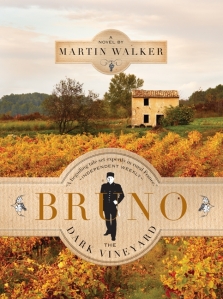 I love Martin Walker’s Bruno, Chief of Police series. Captain Bruno Courreges is a combination of Guido Brunetti and Tom Barnaby, and he solves mysteries in the small town of Saint-Denis in France. He never carries his official gun and has “long since lost the keys to his handcuffs.” He’s a gourmet chef and gentleman detective, and really, how can you resist such a lush, beautiful setting?

So I was thrilled when Harper Collins Canada finally released the Harper Weekend paperback of Dark Vineyard, the second in the Bruno series. A beautiful little edition that can fit in my purse, it’s the perfect companion to my lunch break, preferably spent lounging on a park bench on a beautiful day. Lush, beautiful and romantic are rarely words I use to describe mysteries, but in this case, St. Denis is so utterly tangible that the words just fit.

In Dark Vineyard, American wine mogul Fernando Bondino has come to St Denis to buy up the local vineyards to use for his company’s production. Bruno fears this means the end of the way of life he loves in St Denis. Then people start getting killed. It’s an even more complex mystery than the one in Bruno, Chief of Police, and Dark Vineyard is more tightly plotted, with a more logical string of clues to the big reveal.

Dark Vineyard is also filled with charming characters, from talented young winemaker Max to flirtatious Quebecois Jacqueline. The mystery features arson, a love triangle and a corpse in a vat of wine. It’s a puzzling whodunnit, and, because of the characters and the setting, an absolute delight to read.

What really makes Dark Vineyard such a wonderful book, however, and this is probably true of the Brunetti and Barnaby books as well, is the detective himself. It’s natural to root for the underdog, and Bruno’s town feels like the ultimate underdog of locations, a small-time indie in a world of Walmarts. The Bruno stories provide a wonderful escape, contemporary tales in a town apparently untouched by modernity. And Bruno, by clinging on so tightly to that way of living, is a champion of the underdog, a man of peace in a crusade against those that threaten this leisurely way of life. Sitting on a park bench surrounded by tall, grey office buildings, it’s lovely to imagine living in Bruno’s world, and it’s natural to cheer him on as he struggles to protect it.

In Dark Vineyard, this struggle becomes even more pronounced, because of Fernando’s plans to buy out the town and change its very character. Bruno’s girlfriend lives and works in Paris, and wants him to join her there; after all, he has a standing job offer from the Paris police force. Yet moving away from St Denis will mean giving up a lot of who Bruno is. His struggle to keep his town is touching, especially because his personal feelings may conflict with his professional desire to solve the recent crimes.

Bruno is a man to admire, and his town is a place I want to visit. In an early scene, Bruno walks off in the middle of a haircut to investigate an argument at a nearby wine shop. A customer had broken a bottle of wine and was refusing to pay for it.

Knowing the way to the shelf of Petrus, Bruno led his small entourage to the altar of this temple to wine, and stopped, looking mournfully at the smashed bottle on the tiled floor. Out of respect, he removed his hat…

Here is a detective who mourns the death of a bottle of good wine, who considers a day in the market as “a gathering of friends,” and who genuinely cares about his town and the people in it. Walker’s description of Bruno cooking a truffle omelette (his specialty!) for a dinner party is as mouth-watering as any of Paola Brunetti’s meals, and St Denis is even more lush and beautiful than Tom Barnaby’s Midsomer villages.

Fans of Donna Leon, Caroline Graham, Agatha Christie, foodie mysteries or cozy mysteries — you’ll love Bruno Courreges. The third book in the series, Black Diamond, is already available in hardcover, and the mystery revolves around truffles rather than wine. As a total foodie, I love the subjects of Walker’s mysteries, and I can’t wait till Black Diamond comes out in the lovely Harper Weekend edition next year!