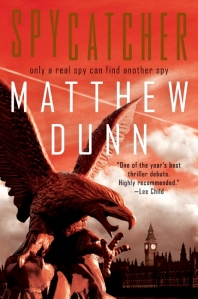 Fan of John Le Carre? You’ll love Matthew Dunn’s Spycatcher. Written by a former MI6 field officer, Spycatcher takes us right into the mind and heart of master spy Will Cochrane. Cochrane is a highly skilled operative, tasked by MI6 and the CIA to locate and stop an Iranian terrorist named Meggido from launching a massive international attack.

Dunn’s background in espionage is evident. Spycatcher has an action-packed story, with some of the best fight scenes I’ve ever read. They remind me of the Sherlock Holmes movie with Robert Downey Jr, where a voice-over narration details all the moves Holmes will make and the reasons behind them (like “fake to the eye to distract, then strike to the throat to incapacitate”). When Will takes a guy out, we see exactly how he does it, and we believe in Will as a killing machine. As a fan of action movies and MMA, I loved reading such scenes of realistic, efficient hand-to-hand combat.

I also love the way Dunn describes the operations carried out by Will and his team of CIA agents. In some scenes, they seem almost unbeatable. For example, when Will has to break into a building, he has Julian, a member of his team, giving instructions in his ear. The instructions are split-second precise, with Julian telling Will where to face, when to go and when to stop and hide. They move with clockwork precision, and so even when things go wrong, we just know that such a highly skilled team can come up with a viable Plan B on the fly.

What really makes Spycatcher work, however, is the depth of insight it gives into the personal lives of spies. The CIA team and Will’s MI6 and CIA bosses are all engaging characters, but Will, in particular, is a very lonely man. In one scene, he runs into his sister, who he hasn’t seen in eight years, at a cemetery, and she comments that it’s just like him to visit the dead and not the living. It’s a striking observation; we realize that, in choosing the life of a spy, Will Cochrane has given up the chance to have a family, and even to be with the family he already has. We also get some flashbacks to Will’s childhood and the traumatic events that have made him such an effective spy and efficient killing machine.

So when Will meets Lana, a woman who can help him get Meggido, and whom Will wants to protect because of all she’s suffered in the past, and when Will realizes he isn’t as lonely with her around, I really wanted them to end up together. I don’t usually care much for the romantic subplots in thrillers; I prefer to focus on the action. But in Spycatcher, since Dunn makes such a compelling portrait of Will’s humanity and loneliness, I just wanted Will to find happiness.

In one of my favourite scenes, Will hesitates to kill a man whom he respects for his courage: “For the briefest of moments, he wanted to leave the brave man alive, just turn and walk away. But he knew he could not allow the man to live. He shot him.” So many action movies or thrillers have clear good guys and bad guys, and if a good guy hesitates at killing a bad guy, it’s because they have some kind of history. But Will had never met this man before, so it was just his behaviour in combat that made Will respect him. Will’s hesitation at killing this man, and yet killing him anyway because it was necessary, is such a wonderfully complex, emotional portrait of Will as both vulnerable human and professional spy at the same time. We feel for Will, and can relate to him, even as we admire his skills as a deadly machine.

In the book trailer on the Harper Collins Canada website, Matthew Dunn says he’s been told to write what he knows, and what he knows is espionage. Reading Spycatcher, I can definitely see it. Dunn takes us into the heart of a spy. Will Cochrane’s adventure is thrilling, but it’s his personal life that keeps us hooked, and his personal demons that we really want vanquished.