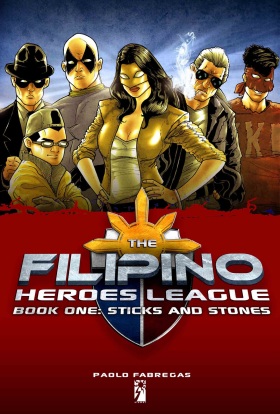 Fabregas got me from the first scene: a Filipino news anchor excitedly relates the exploits of a Filipino superhero who has migrated to America and now works as the sidekick to an American superhero. “A proud day indeed for Filipinos everywhere,” the announcer states. He then mentions in passing a local “raging inferno” with no casualties before moving on to the weather. “Putang ina,” Kidlat (Lightning) Kid says, “We saved 3,000 people in that fire and we don’t even get mentioned.” It’s funny because I can totally see it happening, and it’s sad for that same reason. I also love how the FHL has dwindled in number, because of all the superheroes who’ve become OFH’s (Overseas Filipino Heroes). Again, it’s both funny and sad because it’s true.

The Filipino Heroes League has a dilapidated government building instead of a high-tech fortress. Instead of a Batmobile, they also have a jeep that won’t start, so they end up chasing after bad guys in a pedicab. It’s absolutely, wonderfully Pinoy right up to Kidlat Kid’s crack that pedicab passenger Invisiboy should lay off the ensaimada (a Filipino pastry). I also love how one of the superheroes, who lives at the Payatas Dump Site, has the superpower of being able to create anything from trash (“But it has to be thrown away first”). It’s a third world superpower for a third world superhero, and I found it wonderfully apt.

Fabregas has some delightful tongue-in-cheek glimpses of Filipino culture, like the dozens of billboards along the road featuring the celebrity-of-the-moment and like Kidlat Kid and Invisiboy calling the FHL head “Sir Don” (I can only imagine my boss’ reaction if I call him Sir). In Filipino Heroes League: Sticks and Stones, the FHL has to fight corrupt government officials. Again, I love how Fabregas chose to keep his villains grounded, rather than have the FHL fight aliens. Indeed, if the FHL existed, it would be great if they could help eradicate corruption.

The characters are likeable (I especially love the potential for romance for the sweet Invisiboy), and the story kept me laughing the whole time. My only regret is that this series is only available in the Philippines, so I’ll have to wait for my next visit before checking if the next book is available. To Mr. Fabregas: any chance of an international release?

While I love this book, I wasn’t sure if the appeal would translate to non-Filipinos as well, because of all the pop culture references and (to my mind) inside jokes. To my delight, I discovered that Fabregas’ story does have cross-cultural appeal. I recently lent my copy to my co-worker’s husband, who isn’t Filipino, and he loved the book! He admitted he didn’t completely get some of the references, but he just kinda rolled with it and his enjoyment of Filipino Heroes League wasn’t at all affected. He found it a funny, enjoyable read, and he also liked the superhero who can create anything from trash. He even asked me if there were any more books in the series. So, Mr. Fabregas, if you ever decide to distribute this series internationally, you already have at least two fans in North America! 🙂