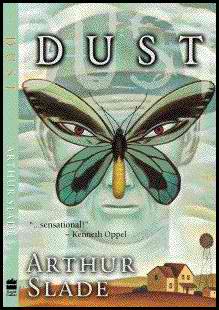 Savvy Reader’s 50 Book Pledge is one New Year’s Resolution I knew I would have no trouble keeping. (My poor gym membership card, on the other hand, is gathering dust somewhere. I’m sure I’ll find it in time for my next round of New Year’s Resolutions.) I promise to read books, lots and lots of books — how fun is that! Anyway, since it was Harper Collins Canada who came up with such a fantastic idea in the first place, I thought it would be only fitting to do one of their CanLit titles for the big five-oh. I’d been meaning to read Arthur Slade’s Hunchback Assignments for a while, so when I discovered a signed copy (I admit, I’m a sucker for signed copies) of his earlier novel Dust, which is set in Saskatchewan and has won various Canadian book awards, including the Governor General’s Award, I knew I’d found the perfect Book 50.

Eleven year old Robert lives in Depression-era Saskatchewan, where residents would sell their soul, literally, for the drought to end. So when pale-skinned Abram Harsich promises them a rainmill, the townspeople are thrilled and sign up to work for him. Only Robert, his book-loving Uncle Alden and a police officer remain suspicious. Why do Robert’s parents seem to have forgotten about Matthew, Robert’s seven-year-old brother who disappeared recently? Why do the townspeople seem unconcerned when other kids go missing? And why, when other people saw rain in Abram’s magic mirror, did Robert and Uncle Alden see a relative who’d died in battle and who said only the word “Evil”?

I have to admit, I usually prefer my books a bit more action-packed, and I sometimes found the descriptions and Robert’s fascination with words a bit overdone. That being said, however, Slade does a wonderful job creating and maintaining an eerie, trance-like atmosphere. Reading Dust is like being in a nightmare — like Robert, we have a constant sense of foreboding, and yet can’t place our finger on why, which just adds to the creepiness. Even Robert, who most sees the truth behind Abram, sometimes falls under his spell.

Slade dedicates his book to W.O. Mitchell, Wallace Stegner, and Ray Bradbury, and I have to admit I haven’t read any of them, so I wouldn’t know how Dust compares. The idea of “dust” however, did remind me of Philip Pullman’s Dark Materials trilogy, and the actual dust in the Saskatchewan setting makes the mysterious, magical aspects of the book feel more real. The eerie, magical yet gritty atmosphere Slade creates also reminded me of Neil Gaiman.

Slade’s writing is as mesmerizing as Abram’s sales pitch. Even in the climactic scenes, I wouldn’t call this book heart pounding or thrilling. Rather, Dust creeps into you, an eerie, chilling tale that hints at a much larger mythology. Like Robert, we may not understand everything that’s going on, but we feel its power, and that’s what makes Dust such a compelling read.