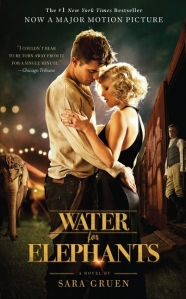 I read Sara Gruen’s Water for Elephants mostly because the trailer for the movie looked very interesting, and I wanted to read the book before watching the movie. I wasn’t sure what to expect, having once tried Gruen’s other book Ape House, and finding so bored by it that I gave up halfway through. Elephants, however, was an utter delight to read, and I found myself zipping through it.

When he receives news of his parents’ death and having left him penniless, veterinary student Jacob Jankowski runs away and joins the circus. He falls in love with Marlena, who is the star of the horse act and wife of August, a cruel and abusive animal trainer. The story takes place in during the Great Depression, where circuses must struggle extra hard to survive. The circus Jacob joins has nowhere near the grandeur of the Ringling Brothers, yet has its own cast of characters. It has a clear class system, and when things get especially rough, only performers get paid and workers know better than to complain. As both the circus vet and friend of the performer-class Marlena, Jacob straddles the uneasy line dividing the classes, eating at the performers’ side of the cafeteria, but being classified as a worker on payday. Circus owner Uncle Al is a greedy swindler who has no compunction about “red lighting” (throwing off a moving train) workers to save costs.

The appeal of any circus story is the cast of characters, and Gruen certainly peppers this book with a colourful bunch. Jacob is the compassionate foil to August. While he starts off angry at his father (also a vet) for having healed animals in exchange, literally, for beans, Jacob soon comes to understand his father’s love for animals, and comes to care for the circus’ menagerie. As a love interest, Marlena is charming, and her love for her horses shows how perfect a match she is for Jacob. A dwarf, a drunk old man, and various other circus “freaks” provide a strong supporting cast — odd enough to keep us ever aware of the circus’ magic, yet human enough to keep it all believable.

The star, which anyone who has seen the movie trailer would know, is Rosie, the ten foot tall elephant who is introduced to August as being too dumb to train. It turns out she is actually quite intelligent, and her antics both add colour to the story (e.g. stealing lemonade) and make you cheer her on (her clear devotion to Marlena and hatred for August). The parts where Jacob gets to see a performance and is caught up in the magic are vividly described, and I at least wished I was there. Little details like “having a straw house,” which is when all the seats are sold out, so the circus puts straw on the ground so more people can still come in, are wonderful reminders of the level of excitement a circus performance can inspire.

Elephants moves from Jacob’s time in the circus to Jacob at ninety (or ninety-three, it’s hard for him to remember these days) at a senior’s home. A circus is setting up just outside the home, and he eagerly awaits his family to take him to the circus. This Jacob is just as lovable as his younger self. Nonagenarian Jacob is cantankerous, and almost offended by a fellow resident who claims to have carried water for elephants in a circus, which Jacob insists is impossible. He clearly misses the excitement and the magic of the circus, and by the end of this book, you will too.